As you can tell, the first Venom trailer did not impress me.  I’m sure you’ll find this surprising because I’m something of a fan of that genre.  If it’s a comic book movie, I’m pretty much guaranteed to watch it.

But something about Venom just turned me off from the start.

Trust me when I say no one suffered more surprise by this than me.  I love Tom Hardy, Michelle Williams, and Jenny Slate.  I haven’t personally seen Riz Ahmed’s breakout role in The Night Of, but I hear he’s phenomenal.  Even Woody Harrelson is in this thing!

With all of the high-quality actors involved, I felt certain Venom would be unlike any other “comic book” movie.  The pre-release photographs looked amazing.  The promotional posters were super cool.

And then I saw the trailer.

Nothing — and I mean nothing — about that trailer spoke to me.  Nothing looked original.  Nothing looked engaging.  Tom Hardy’s weird accent just sounded silly.  Venom, while undeniably awesome in appearance, also looked like more of the same CGI that has plagued comic book movies during the last fifteen years.  (I’m talking to you Doomsday, Juggernaut, Ares, Steppenwolf, and Abomination.)

You want to know what aspect of the trailer sealed my disdain for Venom?  The “venom” appendages that would pop out and help Eddie Brock (Tom Hardy’s human character).  They were beating up guys, grabbing errant motorcycles, and doing all kinds of crazy actions.  This is all fine.  But the visual of the arms flying out of Brock’s sides and then retracting without ripping his clothing or jostling them in any way just struck me as … unbelievable.

Yes, I know how ridiculous that sounds.

I normally have no trouble suspending my disbelief, but those “venom” bursts just bugged me to no end.  There may very well be an explanation provided by the movie makers or comic books for this phenomenon, but I’m certain that explanation won’t help me get past the literal visual.  It took me totally out of the moment and seemed unnecessarily fake when compared to all of the texture on Venom’s CGI body.

While I’m at it, I think they made a mistake in touting Venom as an “anti-hero” movie.  With movies like Logan and Deadpool, the term “anti-hero” has gotten a bit stale.  Those two movies had great concepts that made them both quite unique when compared to other comic book movies, but it seems that Venom doesn’t utilize any such distinctiveness.

Personally, I think they should have gone after a straight “horror” vibe.  In my opinion, Venom can’t be the hero, anti- or otherwise.  He needs to be the monster, the one we fear, the thing that keeps us up at night.

I’d also like to acknowledge that this movie probably isn’t made for me.  I’ve got Secret Wars #8, the issue when Spider-Man got the black orb that provided his new costume.  I’m also fortunate enough to have Amazing Spider-Man #300, Venom’s first appearance.  I bought these when I was a kid — I had no idea Venom would become a pop culture icon.  I just really liked Spider-Man!  This movie version of Venom doesn’t seem to be my Venom.

Several teenagers have told me that they cannot wait to see Venom.  Apparently, from what they’ve shared with me, it looks to closely follow the Venom origin story from the Spider-Man cartoon.  I haven’t seen this cartoon series, which may explain why the trailer didn’t connect with me.  Furthermore, the studio has clearly stated that they realize Venom is extremely popular with teenagers and that they aimed the movie at those fans.  This is totally fine, just unexpected.

I say it’s unexpected because it never occurred to me that Tom Hardy would make anything less than a movie that reflected his personal sensibilities.  Making a movie specifically for teenagers doesn’t seem like his style, but who’s to say?

Maybe I’m wrong about this whole thing.  I’ve been wrong about many things in my life.  It’s entirely plausible that  Venom could be an incredible movie that will blow people away.  Judging from early reviews, though, this doesn’t seem to be the case. 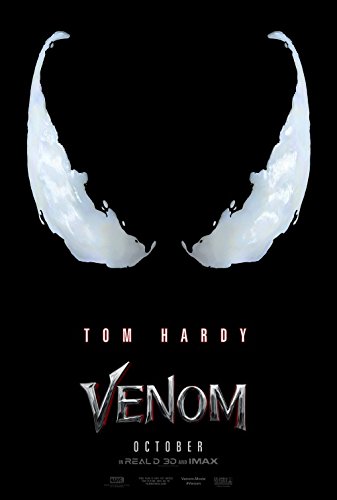