GLOW: Season 2 outshines the first for the very simple reason that much of the groundwork for this ensemble cast has already been laid.  Season 1 entertained and impressed in many unexpected ways, but it still had the task of introducing us to the characters and getting them onto the mat.  Season 2 benefits in that it can build on what came before and really explore these interesting people.

Make no mistake–these are wonderful characters.  Yes, it’s a program about an all-female wrestling show set in the early 80s and much of the comedy centers around that scenario, but these are very real people being portrayed.  All of them are lovable in their own way, and all of them are awful in their own way.  They each have their victories, but they all suffer their indignities as well.  The magic is that the actors have managed to make us care about each and every one of them.

What I like best about this second season is the writing.  Many of the supporting characters get fleshed out this time around.  It’s intriguing to learn about who they are, what makes them tick, and why in the world they got involved with this crazy show!  We become much better acquainted particularly with Kia Stevens’ character named Tamme Dawson.  It would not be easy to be a black woman playing a character named Welfare Queen, and both Stevens and the writers do a magnificent job of exploring that conflict.

Even better than the characterization, though, is the tight–so tight!–plot.  Little moments in the early episodes are hugely important later.  Yet it all feels natural and organic.  The plot isn’t forced, but it all ties together so nicely.  I could be wrong, but I got the feeling that the writers had this entire season perfectly laid out before they even started shooting the first episode.

Furthermore, the main characters became even more complex.  Debbie Eagon (played by Betty Gilpin) evolves as a businesswoman taking control of her own professional life, yet her personal life is falling apart as she struggles with divorce.  She also teeters precariously close to becoming the show’s villain which is an interesting development considering that she’s the star all-American wrestler on the roster.  It would be so easy to make her the obvious heel, but they don’t.  They instead present her as a woman who makes a few bad decisions but ultimately tries to make good even as she keeps her own self-interests at the forefront of her mind.  See what I mean?  Wonderfully complicated.

Allison Brie’s character, Ruth Wilder, is just as enthusiastic and positive as ever, yet she can get very close to annoying.  She never quite crosses that line, but there are moments when you can understand Debbie’s frustrations with her.  Debbie and Ruth are so charismatic because they are utterly realistic.  Like all of us, they have moments where they are at their best, but also moments where they are at their worst.  Ruth is also far from perfect, but she’s learned from her mistakes during the first season.  Amid the first season, her adultery always cast a shadow over her.  That shadow disperses this second season and they seem to have opted to give her some time in the light to make up for the first season.

Marc Maron’s character, Sam Sylvia, started out the season as an absolute jerk who couldn’t care less about his wrestlers, but by the season’s end–well, he’s still a jerk–but he becomes someone we can’t help but love.  There are moments when he finally reaches self-awareness and owns his shortcomings.  Sometimes he just flat-out admits why he’s being so crass.  Those instances really touched me.  I wish I could just say why I’m being so difficult like he finally does.  I don’t want to spoil anything, but watching his evolution as a father, a director, a friend, and a person really brought me joy.  He’s still a cranky old man, don’t worry, but now he’s the kind you want to hang out with anyway.

I’d finally like to touch on Bash Howard, played by Chris Lowell.  Bash originally seemed to be the dim-witted millionaire producer–an ardent wrestling fan with the means to make the Gorgeous Ladies of Wrestling a reality.  In this second season, Bash is still a little naive, yet his simple innocence really pays off regarding his friend and butler, Florian.  Florian is missing the entire season with Bash doing his best to locate him.  Florian’s whereabouts are finally revealed, and Bash is absolutely stunned.  It seems he didn’t really know his friend at all, and it’s heavily hinted that Bash may not fully even know himself.  Lowell plays Bash with such unassuming charm that it’s hard not to love the guy.  He could have come off as a rich, pampered moron, but instead he’s written and performed as someone just trying to make dreams come true.  Again, isn’t that all of us?

I’d also like to commend the cast on introducing some serious wrestling moves in Season 2.  I can’t say for sure, but it looks to me like Brie and Gilpin are doing a lot of their own wrestling, and these are more than simple headlocks.  For actors, especially Gilpin, to execute some technically difficult wrestling maneuvers really speaks to their dedication to the characters.  I appreciate the symmetry of it because, ironically, their characters are just mastering the moves as well since they are new to wrestling.  It’s an interesting learning curve to behold both on the show and in reality.

Finally, GLOW captures the 80s perfectly.  The hair, the fashion, the cars, the food, the music–everything!  My wife and I feel like we’ve stepped into a time machine when we watch it.  There is one episode during Season 2 in which it is made to look like an actual episode of the show on your TV during the 80s.  It’s got the square screen, the locally made commercials–it’s perfect.  It looks exactly like I remember TV from the early 80s.  They really outdid themselves.

If you’re looking for a show with short episodes, magnetic characters, great writing, and funny comedy mixed in with an actual story about real people, GLOW is for you.  There really isn’t anything else like it on TV. 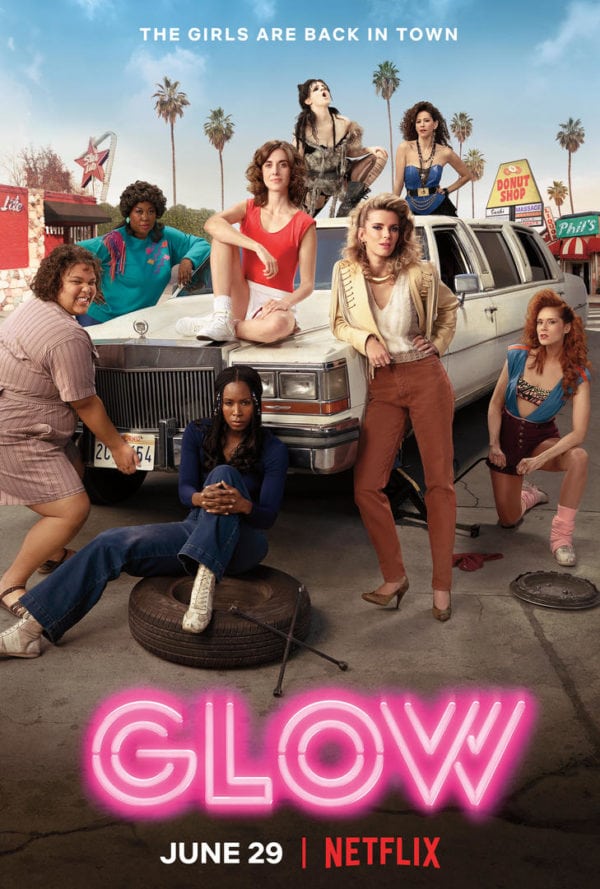