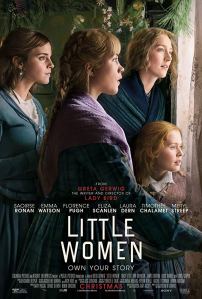 My wife, eleven and seven year old daughters, and I wanted to make special plans for New Year’s Eve. We decided on a movie and dinner, which, while not especially original, sounded delightful to us. My oldest daughter and wife wanted to see Little Women. The youngest daughter didn’t much care either way, nor did I.

I feel that it may be important at this point to mention that I’ve never read the classic novel by Louisa May Alcott. (Yes, I’ve read a lot of novels. Yes, I know it’s a travesty I haven’t read this particular novel. Yes, I understand I’m obligated to read every book ever written.) I also have never seen a theatrical adaptation of Little Women. In other words, I came into this film knowing almost nothing about the plot or characters.

Without a doubt, Little Women is one of my favorite films of 2019. Trust me, no one is more surprised by that statement than the person who wrote it.

In the beginning, I thought I’d made a huge mistake. The first ten minutes were, well … boring.

However, as you begin to meet the sisters and experience their interactions, the charm of the film comes into full effect. The chemistry between the four actors playing sisters Meg, Jo, Amy, and Beth render Little Women irresistible.

Saoirse Ronan plays Jo, the lead character. I’ve seen Ronan before in Lady Bird. There’s no denying she’s among the best at her craft. Ronan delivers a fully developed Jo March, a young woman capable of earning our love and also of instigating our frustration. Like any real person, Jo has moments of wonderful triumph and horrible judgement. However, Ronan’s performance is so charismatic that we can’t take our eyes off of Jo, and we can’t stop hoping for her happy ending.

I won’t break down everyone, but Emma Watson, Florence Pugh, and Eliza Scanlen also offer fully realized characters. When they are laughing, we are laughing. When they are crying, we are crying. They make us part of their family, which is why this movie won me over so thoroughly. In fact, though I hesitate to admit it, the death in this movie brought a tear or two to my eye that escaped and trickled down my cheek. I could count the number of times this has happened to me in a theater on one hand.

By the way, Laura Dern, who plays the mother, fits perfectly with these actors. First of all, I think they all actually look like they could be family, and you see aspects of her in all of their performances. It really is quite amazing. I don’t know if this is simply the result of the novel’s characterizations, if it’s natural chemistry among the troop, or if it happened due to careful direction. Whatever the case may be, the multifaceted Dern also captured my heart.

Speaking of direction, I’d like to address Greta Gerwig, the director. I liked Lady Bird, but I’ve also heard that it’s essentially her life story. I have conflicted feelings when I hear that a director is basically just replicating actual events. That may be small-minded of me, but it’s the way I feel. With Little Women, though, I think Gerwig made some brilliant decisions. Again, I have not read the book, so perhaps this is done in the novel, but Gerwig depicts these people as actual human beings. They are not prim and proper, they are not saints (though they certainly have more charity in their hearts than most), and they are not above petty retribution. Best of all? They fight. Not just verbally, but physically. There’s a moment in the film where a brawl breaks out between two of them and I started laughing. Not because it was meant to be funny, but because it was so fresh. I’ve never seen a movie taking place in the 1800s, based off of a classic work of literature, willing to show young women having a knock-down, drag-out fight. Do sisters fight? Yes! Did sisters fight in the 1800s? Of course! Yet such realism, and bluntness, is rarely shown on film. There are many themes in this film, but chief among them is that women are people, too. I think Gerwig was very smart to show us women actually being people–not cherished artifacts, dainty assets, or beautiful trophies, but real people.

Gerwig chose to also unveil the plot in a broken timeline. In other words, the film does not start at the beginning and run through to the end. Instead, it starts in the middle and then jumps back in time at relevant moments only to return back to the present. It can be a little confusing at times, but, overall, it proved very compelling.

If you follow my reviews, you know that most of the movies that I see in theaters involve laser swords, muscular men in mo-cap suits, and robots with varying degrees of sentience. Bearing that in mind, I highly recommend Little Women to fans of any genre. Like Shakespeare did in his plays, this film captures the essence of that for which we can all relate: love, family, hope, death, anger, and living life.