While in Branson during our spring break, we thought it might be fun to take a train ride on the Branson Scenic Railway.  After looking into it a bit, I particularly liked that a few of the passenger cars had clear, domed roofs which allowed unencumbered views of the scenery.  It sounded like an interesting excursion as it discussed tunnels, bridges, and venturing into Arkansas.

Everyone working at the station proved incredibly friendly, as were the attendants on the train.  Before loading, a conductor offered a few instructions and facts, along with several jokes, as we waited on the platform.  Once he finished, we were welcome to begin boarding.

Seats were not assigned, so we made a point to go directly to one of the domed train cars in order to get a good spot.  At it turned out, there would have been plenty of seating because they have three such cars.

The passenger cars were relics from history, but they had been refurbished and were quite comfortable.  It was fun to think of a time when they proved the primary mode of long-distance travel for people.

At first, we had a great time.  Soon, however, we realized that this scenic tour was not all that … well … scenic.  Perhaps it was simply the time of year, but there really wasn’t all that much to look at in regards to nature.  Furthermore, most of the view included the trash piled up in people’s backyards who live along the railway.  I’m not trying to insult them, but it didn’t make for a pleasurable viewing experience.  There was also a lot of refuse and debris along the rails themselves.

Had the ride only lasted 40 minutes, this may not have been too big of a deal, but the outing actually took almost two hours.  Two long hours.  My children and I grew restless and were ready to get off the train at about the halfway point.

If you have children or are not that into trains, I’d pass on this particular activity while in Branson.  However, if it sounds like you’d enjoy it, you can visit their website to learn more by clicking HERE. 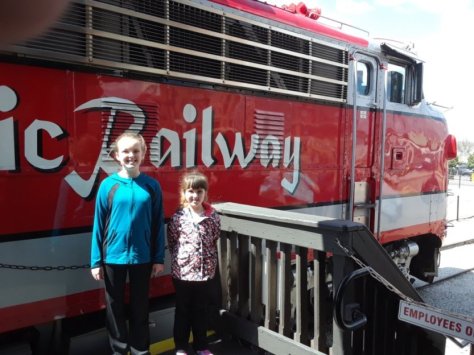 Did you enjoy this article?  Listen to my podcast, Stories By Scott William Foley, HERE!