I fell in love with Mister Miracle (Scott Free), his wife Big Barda, and his partner Oberon in 1987 when they first appeared in Justice League and then also when Steve Rude drew his one-shot special.  He appealed to all of my sensibilities as a ten-year-old.  I mean, he was a super hero, so that was most important.  But he was also a super escape artist!  Awesome!  Married?  That’s cool!  From another planet?  What!?  Traded as part of a peace treaty to Apokolips and raised in torture even though he’s the son of the Highfather, which is pretty much the equivalent to a supreme god?  The stuff was amazing.  Of course, back then, I didn’t realize this was all the brainchild of Jack Kirby.  Had I known that, my astonishment would not have been so unexpected.

Tom King has been on fire lately with Batman, which has not gone unnoticed by me.  I’ve read those available collected editions, and while they are very good, I didn’t really understand why people were so ecstatic about his writing.  Furthermore, if we’re being totally honest, I’ve never head of Mitch Gerads, the artist.

However, I’ll buy anything with Scott Free in it, especially when he’s starring in his own title.  That, plus the positive word of mouth, compounded by Gerads’ delightful Twitter persona, convinced me to run to the comic book store and pick up this first issue.  (I had to wait until after an emergency root canal, but that’s a whole ‘nother story.)

Plainly stated — this may very well be the best first issue I’ve ever read (keep in mind I’ve been reading comics for thirty-seven years).

Mitch Gerads won me over utterly and completely with the very first page.  This first page simply shows Scott Free’s face, but his expression is so real, so, well, expressive, that it haunted me.  I also noticed right away the dot matrix coloring, something totally unnecessary but absolutely charming.  When you consider that Gerads drew, inked, and colored the art in this book … that’s quite a feat, especially because he did all three exquisitely.

Almost all of the pages in this issue are nine-panel grids.  That is a rarity in today’s comic book, yet it’s so brilliantly effective.  It keeps the eyes moving, it keeps the pace going, it conveys both more story and action, and it’s just more fun.  I love that the creative team took a chance on doing something considered passe and making it fresh.

By the way, that expression on the first page?  That’s nothing compared to what Gerads does later in the book.  This is the most real Scott Free has ever felt.  At times I could swear I saw a soul behind his eyes.

Let’s talk about Tom King.  By the second page, King displays his fearlessness by depicting Scott Free in need of a greater miracle than ever before.  King presents a very serious conflict from the onset, one that he treats both respectfully and effectively.  However, as you might expect, things are not necessarily what they seem.  King offers just enough clues to lay the foundation of quite a mystery, one that makes both Scott Free and the reader question everything unfolding throughout the book.

I love the constraint King displays in this first issue.  By utilizing the nine-panel grid, he is able to convey a lot of story without hardly any words at all.  As a result, he can keep the dialogue to a minimum.  These characters actually talk like real people in short bursts.  King does not fall into the trap of making his characters double as narrators explaining the events surrounding them.  They subscribe to the philosophy that, if given enough space to work, Gerads can draw everything we need to know.

I rarely buy single issues because, frankly, they don’t feel worth the cover price.  Often times they strike me as far too brief, disjointed, and obviously part of a much larger whole.   Mister Miracle #1 is obviously part of a larger story, yet due to the sheer amount of artwork, events, and story within, it proved totally satisfying.  Like I said, I consider it the best first issue I’ve read in a quite a while, maybe ever!  Well done to all involved!

On a final note, and this is perhaps the greatest compliment I can offer, I will definitely be in my local comic shop for issue #2.  If such quality continues, I plan to buy all twelve issues of this series.  As someone who has primarily bought only collected editions during the past fifteen years, I can bestow no greater honor. 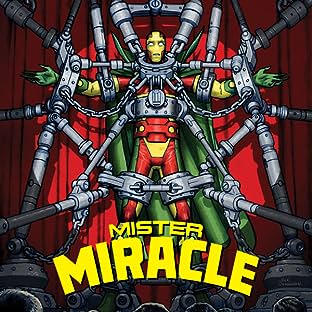