As you know, Disney bought Marvel some time ago, and then Disney bought the Star Wars franchise as well, so it only makes sense that Marvel would return to publishing Star Wars comics.  I have to be honest, I’ve been pleased with virtually every title Marvel has released belonging to the Star Wars universe, and Han Solo is no exception.

This limited series takes place soon after the first destruction of the Death Star.  The premise is rather simple – Han takes on a mission given to him by Leia, whom he seemingly can’t refuse.  He is to rescue some embedded Rebel spies posing as Imperial loyalists.  A famous space race is due to occur near the very planets he is to rescue Leia’s agents, and so Han will use the race as a cover for his real mission.  There’s only one problem – one of those supposed Alliance members is actually a traitor, but they don’t know which one!

Han Solo offers no backstory concerning the icon.  It does not touch upon the origin of his friendship with Chewbacca.  In other words, it steers very clear of any meaty topics the impending movie will likely address.

However, that’s not to say the book is a failure or boring.  Quite the opposite!  In fact, I think this book does a wonderful job establishing an important shift in Han.

I just watched Episodes IV, V, and VI with my young daughters, and I noticed that Han went from being a snarky, selfish pirate to a loyal, selfless hero rather quickly.  Of course, those are movies and have to operate by a different standard of pacing, but when watched in succession it’s a bit jolting.

This series showcases the struggle taking place within Han Solo.  He grapples throughout the book not only with doing the right thing, but also with introspection concerning why he’s doing the right thing at all.  Best of all?  Like Huck Finn, Han has a habit of acting heroically when he doesn’t have time to think.  There is a heart of gold under all that scruffiness, and this book makes a point to shine a spotlight upon it.

Furthermore, we hear a lot in the movies about what a great pilot Han is.  This book takes that to heart while illustrating Han’s skill on multiple occasions.  The race, called the Dragon Void, is designed to disable, even injure, the participants, and so Han must outrace, out think, and outmaneuver his opponents, all while dealing with the Empire as well as a potential traitor on his own ship.

But he does this with his usual swagger, charm, and aloofness.  Han Solo will never stand up front and center and declare himself a hero; he will typically do the right thing while self-deprecating and playing up an aspect of reluctance.  Because of this, the book helps bridge the gap between Han Solo of Star Wars and Han Solo of The Empire Strikes Back.  It hints at the good man into which Han will evolve.

It also works to establish a bit more of Han and Leia’s relationship.  Neither of these two individuals are likely to throw themselves at someone, yet, honestly, the movies progress their relationship along at a pretty fast pace.  The book does an excellent job of inching their romance along, slowly, awkwardly, even confrontationally.  But, by story’s end, there is a spark, an acknowledgement that an epic love story is about to begin.

The art, by the way, is very good.  Mark Brooks has truly captured the characters’ likenesses from film without making them appear too rigid.  His spacecraft are fun while appearing consistent with established mythology and his aliens are varied and interesting.  Best of all, he conveys motion well, especially in regards to the race.  It’s very important that comic book artists are able to literally move a story along from panel to panel, and Brooks manages to service Liu’s pacing well.

If you’re a Star Wars or Han Solo fan, this book will not disappoint.  I know on the surface it seems a little superficial with the clichéd race plot, but Liu offers some deeply interesting characterization and motivation for Han Solo that only enriches the character and grounds his actions in the films. 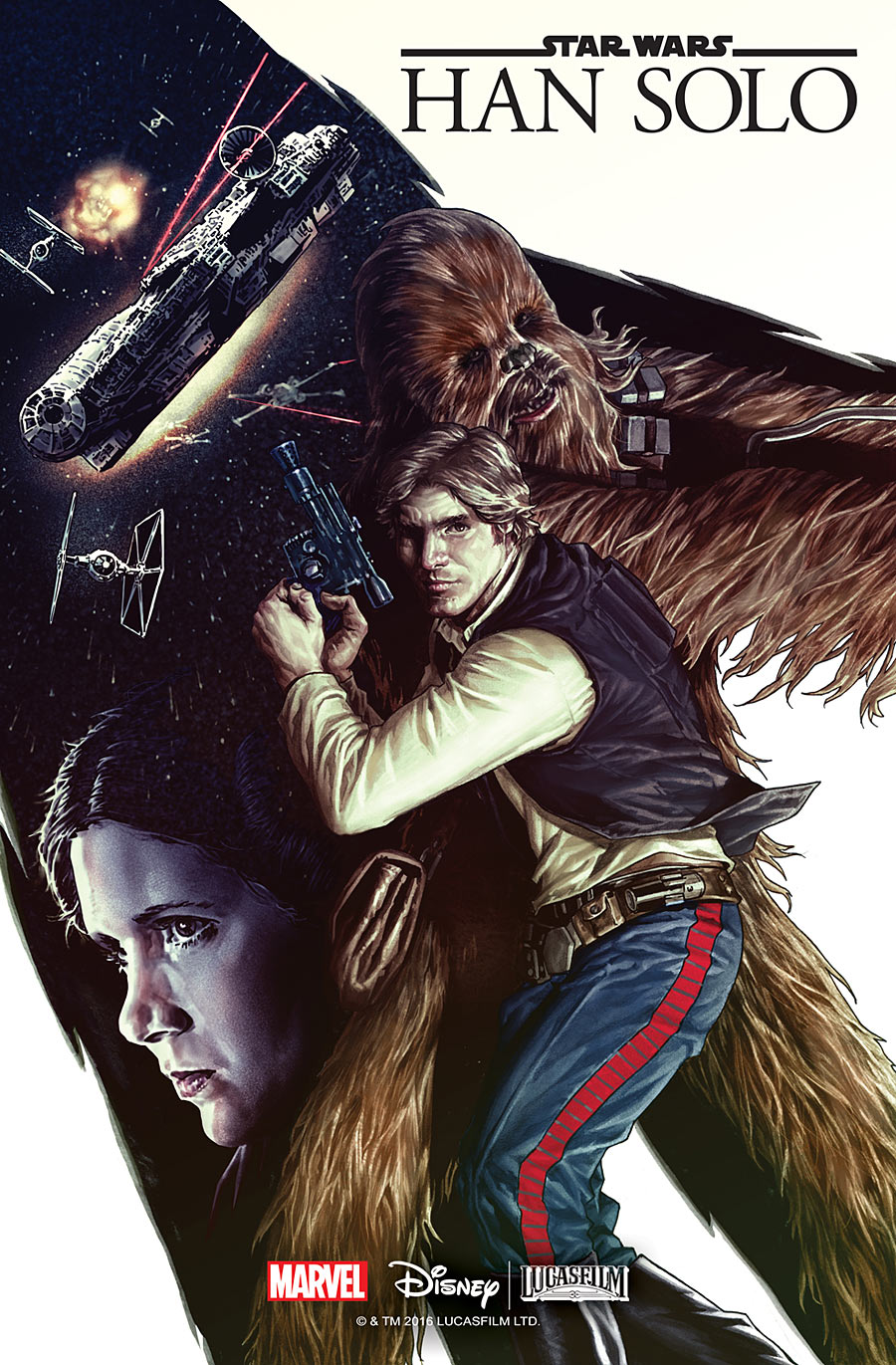