I found myself pleasantly surprised by how much I enjoyed Arrow when it first arrived on the CW a few years ago.  Don’t misunderstand – I love the character Green Arrow, but I wasn’t much of a CW guy.  (I thought I was too old for the station.)  The show didn’t strike me as perfect, but it got a lot of things right, particularly the way it continuously built upon its own mythos.  The flashbacks, the twists, the sheer angst – it hooked me.

Because of Arrow’s success, I felt positively giddy when Barry Allen appeared on the show and then nearly passed out when they announced a Flash series.  I have loved the Flash character for as long as I can remember.  And though I’m really more of a Wally West guy, Barry Allen was my first Flash in the early Eighties.

The Flash’s premier hit all the right chords.  It was a home run.  Since then, though, it’s fallen a little flat for me.  It’s still my favorite show, don’t get me wrong, but it definitely seems a bit inert and even formulaic to a fault.  All of the actors are terribly charismatic, especially Grant Gustin, but they aren’t being given much to work with.  Other than the scenes between Barry and his father, emotionally speaking, I’m not all that invested.

Seeing Arrow on The Flash drove this point home even more.  Watching Oliver and Diggle interact with Barry, Joe, Cisco, and Caitlin helped me realize that other than Dr. Wells, the Flash’s cast doesn’t have much depth.  Not like Arrow’s.  Granted, The Flash is just starting, but Arrow had already established a deep mythology with the Island by this time in it’s first season.  We had the Queens, the Merlyns, Diggle, the Lances – an assortment of characters each with their own problems to overcome.

Truthfully, I don’t want The Flash to be as dark as Arrow, or as violent.  I like Flash as a hero the people can look up to, a positive force of light.  At the same time, though, I really don’t know any more about Barry Allen than I did in the premier, and I get no sense there is more to Barry Allen.  I think it’s fascinating that the two characters I’m most interested in, Dr. Wells and Eddie Thawne, appear to be the greatest threats to Barry.

I have no doubt Arrow will continue to be excellent – last season’s Deathstroke story line absolutely satisfied.  I also believe The Flash will find it’s way, I just didn’t expect it to stumble after such a strong start.  But, when it finally finds it’s footing, I’ll be cheering the loudest. 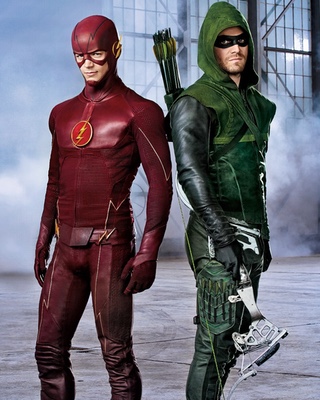