I had the honor of joining Normal Public Library’s podcast entitled “Check It Out.”  Though I thought we would only be discussing the fantastic novel Moonglow by Michael Chabon, Jared was also kind enough to ask me about my own work both as a writer and educator.

It was as fantastic experience.  I hope you enjoy it as much as I did!

Click HERE to give it a listen, and be sure to check out the other episodes as well!

While I admit that Michael Chabon is my favorite author and that I’ll read anything he publishes, I won’t go so far as to say that I love every single thing he releases.  Gentlemen 0f the Road missed the mark for me, and Telegraph Avenue simply did not connect to my soul like I thought it would.

On the other hand, The Amazing Adventures of Kavalier and Clay is the book I name when someone asks for my ultimate favorite.  Nearly all of Chabon’s books are the perfect blend of writing prowess and narrative charisma.  He not only writes engaging, relatable stories, but he writes them better from a technical aspect than nearly anyone other contemporary author out there.

So, with all that being said, Moonglow is my second favorite book by Michael Chabon.

Let me tell you a little bit about the plot without spoiling too much.  Essentially, in 1989, Chabon visited his dying grandfather.  Terminal, Chabon’s mother transported the grandfather from his home in Florida to her home in Oakland.  There, while the grandfather fought against death and the painkillers flooding his system, the grandfather did something which had before proven a rare occurrence – he spoke … at great length.

Make no mistake, however, this story is not just about the grandfather.  The grandmother quickly becomes a star in this book as well.  Mysterious, emotional, brave, witty, beautiful, and ultimately unbalanced, Chabon’s grandmother is not what she seems – not to Chabon’s grandfather, his mother, or even to the grandmother herself.  In fact, in the end, Chabon is the only one who seems to know the truth about his grandmother.  I won’t tell you why or how.

I love this book because his grandfather is the coolest man to have ever lived.  You can’t help but think of the best aspects of your own father or grandfather as you read this story, and, believe me, he will remind you in some facet of your own paternal role model.  Chabon’s grandfather isn’t perfect, not by any means, but that’s also what makes him so loveable.  Plus, as you well know, much like ourselves, our own fathers and grandfathers are not perfect, either.

Chabon also plays with the narrative style quite a bit in this novel.  In terms of time, it is not linear.  Nothing happens in order, and it’s up to the reader to piece it all together.  But Chabon makes it a fairly seamless task for the reader, and in using such a structure, he ultimately builds mystery, suspense, and provides great emotional payoff.  Chabon’s choices are right on target; his pacing is a joy to experience; his tone, while at times very somber, is also light and warm in a manner that will draw you in and make you happy.  There’s even a great joke about Chabon’s style, delivered from the dying grandfather himself.  Be on the lookout for it.

Furthermore, Chabon makes a point to let you know that while this story actually happened, his novel is fiction.  He’s the first one to admit that he has taken great liberties without too much care or concern.  Some of it is probably word for word truth, and some of it is probably completely fabricated, and the beauty of it is that we, the readers, have no idea how to distinguish one from the other.  And to that I say, “Who cares?”  In my mind, reality is always a matter of perception.  When I read a book, I perceive, interpret, and process the story within my mind, which thus makes the book a part of my own personal reality.  As a result, “fiction” and “nonfiction” become a bit of a moot point when it comes to things like this.

I’d also like to say that this is perhaps the most straight-forward of any Chabon novel I’ve ever read.  Is it well-executed?  Magnificently so!  I laugh with my friends that I don’t believe Chabon used the same sentence structure more than once in the entire thing.  That’s an exaggeration, of course, but he’s that much of a master at writing.  And yet, this novel is easy to digest.  It’s easy to follow.  It’s not rife with metaphor.  It’s got great humor, great sadness, great love, and great action.  Oh, what action!  The World War II parts of this book set my imagination on fire.  In fact, because the grandfather is such an unusual everyman, and because the WWII scenes are so vibrant, I actually gave a copy of this book to my own father for Christmas.  I’m not sure when he read a book last, but he made a point today to tell me how much he’s loving Moonglow.

As we live our lives, they, for the most part, probably don’t seem that varied or interesting.  Yet, by our life’s ending, I’ll warrant most of our stories could fill a book, and I imagine that most of our children or grandchildren would love to read that story and experience who we were at 15, 35, 55, and even 75.  Chabon tapped into something wonderful by utilizing such a concept, and he’s got the talent to make it work.  Moonglow has shot to the top of my list of gifts to give friends, family, and coworkers.  I truly believe it’s a guaranteed good read for any reader.

How good is this book?  The minute I finished it, I turned back to page one and started reading it again.  Even better the second time. 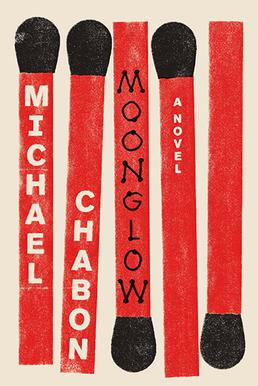