This is it! In this final episode of Dr. Nekros: Volume I, the good
doctor and his ex-wife, Zetta, finally come face to face with the
monster Xaphan in Zetta’s own home! For months, Zetta’s mission has
been to save Dr. Nekros from the red fiend, but now that her husband,
Jason, and her two boys are in danger as well, Zetta must make a
difficult choice. Be warned – this is an abhorrent culmination, no one
is safe, and blood will be spilled.

Remember, this series is exclusive to the Amazon Kindle, but if you
don’t have a Kindle, you can still read it on a Kindle App.  Each
episode is only $00.99! 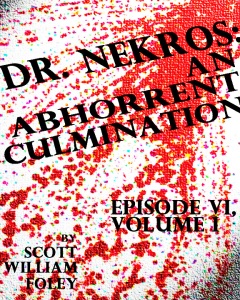 This is it! At last, Dr. Nekros has Xaphan in his sights and the ghost
hunter is ready to exact his revenge, and it’s all thanks to Zetta’s
husband! But when Zetta admits that she knows nothing about Jason’s
information, Dr. Nekros grows suspicious. Is this yet another trick by
Xaphan, and if so, are all of them – including Zetta’s husband and
sons – being led to slaughter? Find out in the second-to-last episode
of Volume I entitled “A Nightmare Realized.”

The second episode of my Dr. Nekros serial is live, and it is entitled “Phantasms and Chicanery.”  If you haven’t checked it out yet, I’d like to offer you this sampler of the first fourth of the story.  In it, three months have passed since “The Tragedian.”  Though Zetta has not heard from her ex-husband, Dr. Nekros, the recurring nightmare continues that she and her husband, Jason, believe foretells Dr. Nekros’ death by the demon Xaphan.  They desperately want to save the charlatan from such a horrid fate, but he’s not making it easy.  When Dr. Nekros finally calls upon Zetta for assistance with what he claims to be an authentic haunting, she and Jason seize the opportunity.  Unfortunately, things go awry when Zetta awakens in Dr. Nekros’ arms after an all-night ghost watch and devastating truths are revealed that may prove too much for her to bear.

Sound interesting?  Then give the first fourth a read, and if you like it, follow the link to read the whole story on your Amazon Kindle!

The heat seared her to the core, yet she could not turn and run. Micah needed help, and she would die before she’d willingly let any harm come to him again.

She saw the demon Xaphan clutching Micah by his head with a clawed, gargantuan hand. The monster flung her ex-husband’s body to and fro as a dog whips a rat. Xaphan grinned at her, revealing a set of horrid fangs; his gorged, animalistic eyes gleamed in the surrounding flames; his naked, red skin glistened from the torrid blaze. He had two massive horns erupting from his forehead, bisected by a towering, jagged mohawk. Intricate rings perforated his pointed ears, and a beard hung from his chin all the way down to his chest.

Besides an otherworldly loincloth, he wore nothing but short, course black hair over his chiseled, scarlet body, and that’s when she realized he had horns exploding from his shoulders, elbows, knees, and heels as well.

Only Hell could conceive such an entity.

Xaphan must have been huge, for Micah, anything but a small man, looked almost childlike in the monster’s grasp. In fact, Xaphan’s four-fingered hands were so large that, had she not recognized the back of Micah’s pea coat, it could have been anyone in the brute’s grip. However, even if the pea coat had not revealed the identity of the demon’s prey, she still would have known it was Micah, for she heard his deep voice screaming, “No! No! Don’t do this! You devil; don’t do this!”

As the flames grew ever higher and hotter, Xaphan finally finished thrashing Micah about. The red demon held Micah directly out, at arm’s length, and as the ghost hunter pleaded for Xaphan to stop, the savage slashed his throat with a bloodstained talon.

Strangely, Micah’s screams intensified, and they were now coupled with Zetta’s own muffled cries of terror as she witnessed blood splatter across the room, hit her in the face, and blur her vision. She wiped at her eyes madly before she saw Xaphan hurl Micah’s limp body through a sliding glass door that Zetta knew to be the one in her own living room.

Xaphan looked directly at her, smirked, and then howled with laughter, drowning out her shrieks.

She shot up from her sweaty pillow. Perspiration soaked her shirt and boxers; her hair, having come loose, was stamped to her wet forehead and cheeks. She could still hear Xaphan’s laughter even as she looked into her husband’s eyes.

The moonlight illuminated their bedroom like a candle inside a womb, and she could see Jason’s every feature perfectly. His face wore an expression of utter concern.

“Was it The Dream?” he whispered carefully so as not to wake the children. It seemed a miracle that his wife’s wails hadn’t already done just that.

She rested her head in her palm with her knees drawn up to her chest before replying, “Yes … it was The Dream.”

Jason began rubbing her back and asked, “Any different?”

“No,” she answered. “Exactly the same as always.”

“Do you think the increased frequency means anything … important?”

Zetta lifted her head, looked at her husband, and said, “I hope not.”

“We have to get in touch with him, Zetta.”

Sighing, Zetta replied, “I’ve been trying, Jason. I leave comments on his blog all the time.”

“Only once. He told me he tossed my cell phone ten minutes after I gave it to him.”

Jason huffed, “He’s not making this easy, is he?”

“He’s a stubborn jackass. Always has been.”

“Have you tried telling him specifically why you want to tag along? Maybe he’d be more receptive if he thought this wasn’t merely business legitimization.”

Zetta answered, “No, that would only fire him up. He’s trying to find the demon … or whatever … remember? Besides, his business isn’t legitimate. I found that out with the Hords’ case. He’s a cheap con artist.”

Using a steady voice, Jason said, “Even so, we can’t let him die; not if we can help it. This isn’t something the police can handle. They wouldn’t even take it seriously in all likelihood. It’s up to us.”

Propping her head against his lightly haired chest, Zetta said, “You’re such a good man, Jason. Between my ex-husband and a supposed demon … well, most husbands would never be this understanding.”

Jason kissed the top of her scalp and smiled. “I’m not like other husbands.”

Zetta pulled Jason closer, and, because the two of them had a few hours before the children would wake, they made the most of their solitude.

Zetta sat at the desk in her home office, reviewing the notes on a potential client, when she heard a phone ringing from the depths of some unknown pit.

She exploded to her feet and dashed to the adjoining kitchen where she threw open the “junk drawer.” Long ago resolving this phone in particular would never be used, she had cast it away to no-man’s land. She’d bought the renounced phone for one reason and one reason only, and now it seemed its purpose would be fulfilled at long last.

She yanked it out, opened it, and hit the green button. But it was too late. Voice mail had taken over.

Waiting half a minute, she realized there would be no voice mail, and so she slammed the phone down and screamed in agitation.

She hit the green button again and yelled, “Micah!”

“What?” a surly voice returned. “You tell me to call then don’t even answer your phone? I’m getting mixed signals here. I’ve been trying to reach you for days.”

“It’s been over three months, Micah—”

“Whatever. Besides, you told me—when you graced me with a lone response—that you threw the phone away.”

She heard Dr. Nekros clear his throat before he said, “Oh. That. I actually wrote the number down on a napkin before I gave it away. You know … just in case.”

Zetta would have loved nothing more than to further embarrass him with that information, but she had to remind herself that she was trying to save this man unwilling to save himself.

They remained silent for several moments before Dr. Nekros admitted, “Listen. I need a little help.”

Again, his humility gave her endless pleasure, but she fought against taking advantage. She simply asked, “With what?”

He laughed, but only a little. Not an embarrassed laugh, but a genuine one. “No, nothing like that. This one is real.”

“Real enough that I need all that fancy equipment you offered. Specifically, the client wants visual proof of his haunting. I could give it to him if only I had something to record it with. That’s where you and your husband’s gadgets come into play.”

Realizing this was her opening, Zetta couldn’t afford to let it pass. “I’ll have to clear my schedule for the next few days, but then I’ll be on my way. Tell me where to go.”

“I’d love to, but first let me give you directions.”

To read the rest of the story, follow this link:

I’m very excited to announce the arrival of Dr. Nekros to the Amazon Kindle!

Dr. Nekros is a ghost hunter with a terribly scarred face.  He travels the countryside in a haunted 1936 Packard, a car for which he rarely gets along.  To make matters worse, his ex-wife Zetta reappears after thirteen years of separation, and she has a rather unusual demand.  But how will her re-emergence alter Dr. Nekros’ investigations, and, more importantly, his true objective?

The plight of Dr. Nekros will span three volumes with each volume comprised of six episodes.  Each episode will be released two months apart.  This is the beginning of a three year odyssey!

This series is exclusive to the Amazon Kindle as well as Kindle applications, and each episode will cost $00.99.

Join me as we explore the next phase of Dr. Nekros and Zetta’s relationship, the cause of Dr. Nekros’ disfigurement, how the Packard came to be haunted, why Zetta would leave her beloved husband and adored children, and Dr. Nekros’ real mission.  There will be love, betrayal, monsters, reunions, ghosts, trickery, revenge, death, black magic, and battles … But will there be salvation?