Are you in need of a new epic series?  Try Dr. Nekros, a trilogy that I like to describe as Moonlighting meets The X-Files.

When Micah Vadenburgh is ravaged by a demon after trying to jump-start a ghost hunting career, he abandons his wife, his doctoral degree, and even his dog in pursuit of vengeance.  Ten years later, Micah has adopted a new persona–Dr. Nekros–but is no closer to exacting revenge.  Zetta Southerland, his ex-wife, appears one day with a warning that his life is in danger.  Little does Dr. Nekros, or Zetta, realize that the demon is closer than they know, and they have both fallen into the monster’s trap.  Dr.Nekros is a darkly humorous story about the depravity of obsession, but it also explores the bonds of family and the hope of redemption.

If this sounds like a series for you, download the first e-book at Amazon or Barnes and Noble by clicking the links … 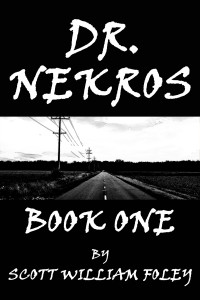 I loved this movie!

I enjoyed the X-Files television program.  I wouldn’t say I was a diehard fan or anything, but I liked it quite a bit.  So when I saw the commercials X-Files: I Want To Believe, I made a note to check it out on DVD, but didn’t get worked up enough to go to the theatre for it.

X-Files: I Want To Believe has virtually nothing to do with the previous X-Files movie.  And it also thankfully didn’t demand expert knowledge of the television show, either.  A few terse lines of dialogue pretty much caught everyone up to speed.  Sure, there were a few moments for the devout fans, but by and large, anyone could come into X-Files: I Want To Believe and simply enjoy a good movie.

Speaking of which, I just had a great time watching this film.  Mulder and Scully are such cool characters, and David Duchovny and Gillian Anderson have such wonderful chemistry, I just really can’t get enough of these two on screen.

The plot is devoid of aliens or monsters; rather, it’s a murder mystery that takes on a slight science fiction element, but nothing supremely outlandish.  The crux of the story revolves around Billy Connolly playing a former man of the cloth who has visions related to missing women.  Scully, of course, doesn’t believe a word of it, but Mulder, as you would expect, gives Father Joe (Connolly) the benefit of the doubt.

In true X-Files fashion, the movie ends with just as many questions as answers, but hey, that’s what makes it an X-File, right?  Even with that being said, Anderson and Duchonvy offer fine performances and the movie is well made and very exciting.  Some of the acting is a little below par, specifically in regards to Amanda Peet and Xzibit-yes, Xzibit plays an FBI agent in this movie.  Also, they used the phrase “I want to believe” so many times it got to be a distraction.  I got it when it was first said-I caught the connection to the title.  No need to drive it home over and over again.

Instead of trying to create a garish, monstrosity of a movie, Chris Carter and the gang deliver an enigmatic, tense mystery that kept me on the edge of my seat and felt more like a really long episode of the TV show-and that’s a good thing!

Oh, and by the way, the subplot featuring Scully’s patient brought tears to my eyes.  Seriously.  If you’re a parent, keep the tissue nearby.