I’m a big fan of IDW’s series entitled Locke & Key. Written by Joe Hill (son of Stephen King), this title was a little bit horror, a little bit fantasy, a little bit family saga, and a whole lot of charm. Besides the captivating writing, it also benefited from a nice blend of the cartoonish and the Gothic from artist Gabriel Rodriguez.

When I heard Netflix planned to make a series out of it, I got very excited. After a few starts and stops in production, it finally got made.

I actually watched this series after it released several weeks ago. I’ve had some time to think it over and … it’s not great.

That’s not to say I didn’t enjoy it–I did. But I’m also a fan, you see. I’m not completely objective about Locke & Key. While I thought it looked great and had nice pacing, it just failed to capture the magic of the comic series.

This is primarily because of the actors. The acting just never quite clicked for me. I didn’t ever enter that space where I forgot that I watched people acting. They didn’t become the characters, and that’s a problem with a story like this.

Also, the show didn’t commit to its actual identity. It frankly tried to play too nicely. I think it hoped to capture the Stranger Things crowd, but Locke & Key is not Stranger Things. It’s far more violent, graphic, and intense. The themes are more mature, and the consequences more severe. I love Stranger Things, but they shouldn’t operate on the same frequency. As it stands, Locke & Key came off more like a bland imitation, which is a real shame.

Of course, I want you to watch Locke & Key because I want more of it on Netflix. It’s not too late to course correct. Like I said, it looked beautiful, and they moved along at just the right speed. They just need to get comfortable in their own skin and maybe bring in an acting coach. 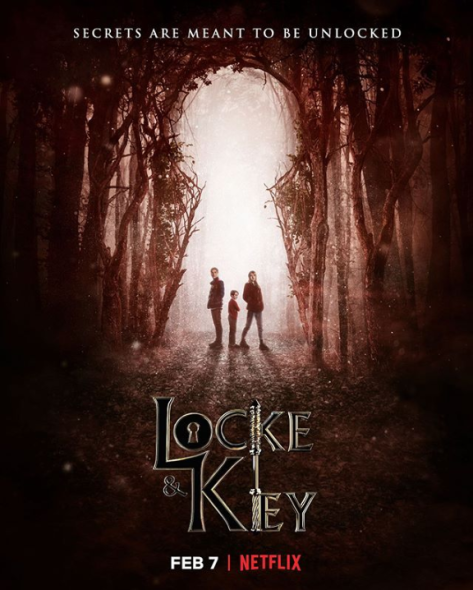 I finished this Netflix series several weeks ago and needed some time to wrap my head around it. After some days passed, I realized that I was really, really, really overthinking this show.

The Witcher is an enjoyable watch in the way that peeling dried glue from your fingertips is enjoyable. There’s no real purpose behind it, it doesn’t seem to accomplish much of anything, but man, is it ever fun.

That’s the operative word — fun. The Witcher doesn’t have particularly great special effects, the story is convoluted at best, the acting is mostly regulated to a series of grunts and scowls, yet it’s somehow a rollicking good time.

If you find yourself with some extra time, give it a shot. Beware, there is some pretty graphic nudity from time to time, so make sure the little ones aren’t around. Furthermore, the violence is never overtly gory, the language is about on par with most “mature” themed shows, and there’s even a pretty catchy song you might get stuck in your head. 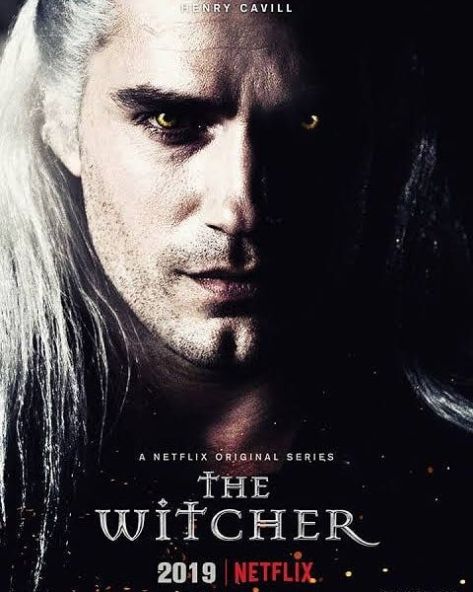 If you’re looking for a new show to binge, I highly recommend Netflix’s The Umbrella Academy.  I just finished it last night and it’s one of the only series that I’ve ever watched that made me think to myself, “I can’t wait to watch this whole thing again.”

There’s something absolutely delightful about this show that makes it a blast to experience.  I’ll share with you just a few of the things that I appreciated most.

If you’re unfamiliar with The Umbrella Academy, I describe it as The X-Men meets Stranger Things.  An aristocratic stick-in-the-mud named Sir Reginald Hargreeves takes it upon himself to collect seven babies born under mysterious circumstances throughout the world.  He trains them from birth to fight evil and deter an impending apocalypse.  He counts on his android nanny and sentient, well-dressed primate to assist him.  His Umbrella Academy is cold, rigid, and unforgiving.

The show begins with the adult members of the Umbrella Academy returning home due to Hargreeves’ death.  It’s the first time they’ve been together in years.  It becomes very apparent, very quickly, that all of these former child super heroes are damaged goods.

However, this isn’t the melodrama of The X-Men.  This show is actually fun.  In fact, while it’s never laugh-out-loud hilarious, it is consistently amusing to the point you are on the verge of laughing.  The light touch even among serious happenings is why I compare it to Stranger Things.

Consequently, and perhaps surprisingly, The Umbrella Academy is just as much about its characters as it is about the unavoidable apocalypse.  Every single member of the Academy is given a backstory and a concrete personality that is easy to love.  The show randomly slips in and out of characters’ pasts, which makes it unpredictable and captivating.  Furthermore, every aside, every detour, contributes to the overall story line.  This is a tight plot with well-developed characters.

I adore the fact that they took the execution of this show so seriously because they easily could have shortchanged the plot and allowed the visuals to take center stage.  Because, wow, this show looks amazing.  The production quality is out of this world.  I felt like I’d actually entered another world.  For example, Pogo, the gentleman primate, seems to be just as solid as the actual human beings in the scenes with him.  Astounding.  The special effects are Netflix-money good.

Speaking of production quality, some Netflix shows have had a bit of trouble with pacing.  I’m specifically talking about the Marvel programs and even the recent seasons of Orange Is the New Black.  Granted, we’re only in The Umbrella Academy’s first season, but the pace never let up.  This show knows it’s competing with your cell phone, and it dares you to look away.

Even amidst the crazy action, the huge explosions, the wonky time travel, and the intense fight scenes, I liked this show best because I loved the characters.  In their own unique way, each and every one of them is charming with a great deal of charisma.  I challenge you to pick one overall favorite.  For me, it changed from episode to episode.

So what are you waiting for?  Get enrolled in The Umbrella Academy tonight! 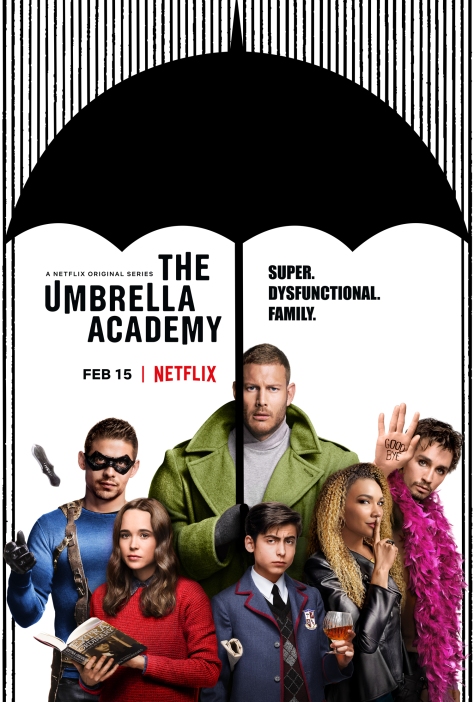 We’re not Hulu subscribers, so when everyone heaped praise upon The Handmaid’s Tale, we had to wait until it came out on disc to experience it for ourselves.

We were able to finally watch it a few months ago, and we can attest that it deserved all of the acclimation it received.  Sure, it was intense, disturbing, and fraught with modern day political implications, but the sheer skill in terms of writing, acting, and production could not be denied.

In fact, the series impressed me so much that I immediately found the book and read it as well.  To my surprise, the first season of the show followed the book very closely.  The only aspect of the book the series did not cover pertained to the final ten or fifteen pages.

I presumed the second season would tackle those last pages of the novel.

I could not have been more wrong … so far.

The second season of The Handmaid’s Tale blazes its own trail by adding original material to the classic Margaret Atwood novel.  It’s serving as something of a sequel to the book as it continues Offred’s plight, the Waterford’s tyranny, and the general awfulness of a place like Gilead.

However, they’ve managed to up the stakes this season.  It’s become even more tense, more unsettling, and more … well, horrific.

Honestly, my wife and I watched episode eleven (of thirteen) last night, and we both decided that this season will be our last.  Yes, we’ll finish it out, but we agreed that neither of us wants to infiltrate Gilead’s boundaries anymore.

Minor spoilers here–with Offred’s complicated pregnancy and a heart-wrenching story line revolving around her first daughter, as well as an extremely frightening scene depicting rape … it’s too much.  This dystopian society of Gilead has become too real.

This isn’t the first time I’ve had to retreat from a show.  Back in 2014, The Walking Dead began killing children every week and threatening to kill an infant, so I had to quit it, too.  Our real world is scary enough.  We see enough tragedy on a daily basis in our reality.  I can’t deal with this level of calamity on a show, too.

In the end, when I watch a show, see a movie, or read a book, I’m engaging in a certain amount of escapism.  I cannot, for a sustained amount of time, feel extremely depressed after watching a show.  Every once in a while is manageable, but every episode of an entire season?  Maybe it’s not as potent if watching it on a weekly basis, but we’re watching an episode a night, and it’s absolutely altering my overall mood.

The Handmaid’s Tale crossed a line in my mind.  I understand children are the driving force of the entire premise, but by bringing them front and center, and by teasing their exploitation and abuse on a regular basis, in addition to the constant barrage of violence against powerless women … Again, it’s too much.

This second season is too blunt, too graphic, and too ruthless.  I found the first season, though very troubling, a little more nuanced, poignant, and purposeful.

I think the show and the book both serve as a significant warning against people manipulating religious and political beliefs for their own personal glorification, and I believe The Handmaid’s Tale inspires us to hold firm onto our own morals even in the face of rampant corruption, but I simply can’t partake in such abasement as a means of escapism any longer. 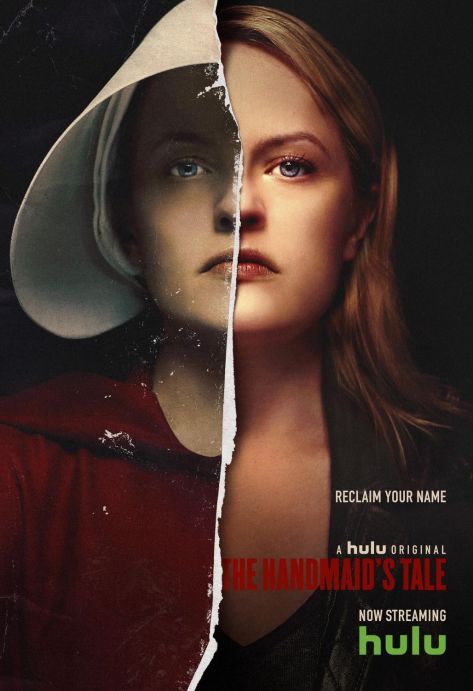