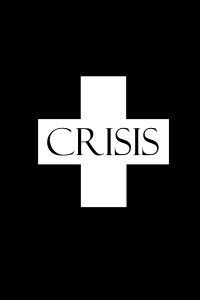 Holly looked at her nineteen-year-old daughter through narrowed eyes. She held her cell phone in both hands after hanging up with the hospital as she stood next to the kitchen island.

“He’s not alone? Abby, what are you talking about?” Holly demanded.

Just a few feet away, standing by the kitchen table, Abby put her own cell phone down and replied, “Dad’s not alone—you know that.”

“Really?” Holly seethed with her head tilted. “Who’s with him, then?”

Holly stomped past her daughter before plopping down on the living room couch. With her elbows upon her knees, she dropped her head into her hands.

Abby did not move from her spot, nor did she unfold her arms. She questioned, “You know that, right?”

Holly murmured into her palms, “Yes, I know. But your father needs more than that. He needs us.”

Abby lifted her eyebrows just a bit as she asked, “He needs more than Jesus? Before the coma, when they kicked everyone out of the hospital, Dad texted me. He said he wasn’t afraid. He cited Psalm 23.”

Holly lifted her head up and stared at her daughter. “I really don’t want to hear about the valley of Death right now, okay?”

“Are you worried about him?” Abby asked.

“What’s the matter with you?” Holly spat. “Of course, I’m worried about him! The doctor said he’s not going to make it!”

“But Dad’s okay with that,” Abby said as she unfolded her arms and shrugged her shoulders. “He wants to go to Heaven. That’s what we all want, right?”

“God,” Holly mumbled. “You go off to college and become a theology expert …”

“No,” Abby answered a little coldly. “I’m not a theology expert; I’m just repeating everything you taught me. What’s the matter with you?”

Holly jumped from the couch, pointed at Abby, and screamed, “Your father is dying! My husband is dying—alone, in a coma, suffocating—and nobody cares! Our own daughter doesn’t care!”

Abby put her hands on her hips and took a deep breath. Once she had control, she said, “I care. I care very much. But you and Dad taught me to believe, to have faith, and to accept Christ into my heart. You taught me to do these things so we could one day reach Heaven and join Him in all His glory. Are you saying you don’t actually believe those things?”

Holly fell to her knees and began to cry. Between sobs, she said, “Those are just things we tell kids … children’s stories …”

Abby stood her ground. “That’s not true. Not to me. Not to Dad.”

Unable to meet her daughter’s eyes, Holly remained on her knees with her head hung low.

“I don’t understand you,” Abby confessed. “You were our youth group sponsor. We prayed together every dinner—every night before bed. You got me up every Sunday for church. I don’t …”

“Those things …” Holly began as she fought to stifle her tears, “… they were just the right thing to do. I wanted to raise you … right.”

With eyes widened, Abby asked, “Are you saying you never actually believed?”

Holly faced her daughter again. Tears ran down her cheeks and her throat hitched. As she started to answer, Abby interrupted her.

Abby moved toward her mother, dropped to her knees as well, and wrapped her arms around her.

The daughter placed her head atop the mother’s and squeezed tightly.

“You’re upset. No matter what, I know Jesus is sitting with Dad right now, holding his hand. And Dad knows it, too. He’s not afraid. He’s joyful.”

The two women remained on the floor, hugging one another, waiting for the call.

This is a work of fiction. Names, characters, places, and incidents either are products of the author’s imagination or used fictitiously. Any resemblance to actual events or locales or persons, living or dead, is entirely coincidental.

I’m excited to announce that free samples of my work are now available at my website.  Among them you’ll find stories delving into horror, religion, family dynamics, love, humor, and empowerment.  If you like them, I hope you’ll consider checking out my two short story collections and novel.

Traditionalist James Henderson is enraged and he’s got a bone to pick with Marty Yaple, a youth minister.  In fact, James is so angry that he raids Marty’s church, catching Marty off guard.  It’s James, though, who is surprised in the end, because Marty turns out to be someone other than who James envisaged, and because the minister helps James realize that his real issue isn’t with Marty’s Christmas Eve service—Get Jiggy With Jesus’ Birthday—but with something else entirely.

But just what is at the heart of James’ fury?  How does Marty help James deal with his ire?  What is so different about Marty that James hadn’t expected?  To learn these answers, read “A Christmas Confrontation” in this month’s issue of News and Views for the Young at Heart.

We all know what these things mean on the surface, but life experience tells us there are many gritty nuances to each of these, and Beanblossom does not hesitate to dive in to the murkiness that is real life.

However, just as she shows us the darker side of these things, she also shows us the power of hope when it comes to love, religion, family, and living as a human.   Her characters are flawed, as are we all, but they also have hope, and through that hope they meet with victory, though they do suffer some losses along the way.   Beanblossom understands how to create characters that are active participants in the human race.

Beanblossom has written a book that is very easy to get lost within.  We follow an epic tale as her main characters, Abby and David, struggle to come to terms with the consequences of their past actions.   Abby and David’s story is a complicated one, and Beanblossom gives them the time they deserve, which translates to a very long book.  If you are one who enjoys settling in and joining in the lives of characters, watching them grow and meet the challenges without the author rushing things, then I believe The Tamarisk Tree is for you.

Be warned, however.  Beanblossom pulls no punches.  She is not afraid to display life as it truly occurs, and for some, this realistic depiction may be offensive.   Beanblossom reminds us of the beauties of love, religion, and family, but she doesn’t shy away from the atrocities that can occur, either.