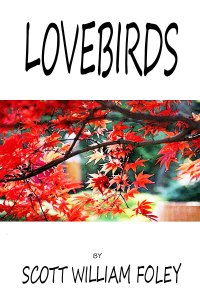 Bob Lyons walked into the kitchen, his blue, denim shirt soaked in sweat and peppered with twigs, leaves, and dirt. Paula, his wife, bent at the waist and peered under the sink in search of something. Because the basin had nearly filled with hot water and soap bubbles threatened to overflow, it seemed she’d been hunting longer than intended.

“Need these?” Bob asked in a gravelly voice while peeling Paula’s dishwashing gloves off of his hands and tossing them onto the adjacent counter. He ran callused fingers through his damp, thinning flattop before wiping his forehead with a blue and white bandana that he had pulled out from his back pocket.

Paula, irritated that Bob had obviously used her gloves for something other than washing dishes, huffed before embarking upon her chore without the benefit of protective latex.

Shuffling to the cupboard, Bob removed an old mason jar. Next, he invaded Paula’s space by reaching past her and turning on the faucet. He filled his jar with cold tap water and then left her in peace when he sat at the nearby table.

While rubbing and scrubbing away grease and grime, Paula mumbled, “So you couldn’t resist poking your nose in, huh?”

Bob clenched his jaw, thumbed at a dent in the table, and uttered, “They were making a mess of things. It’s like they don’t have any sense. They needed my help.”

Paula encountered a particularly resilient chunk of grease and, as she threw her whole body into scouring it, grunted, “They’ll never learn if you do it for them.”

“I know,” Bob sighed. “I didn’t have any choice. They’ve got babies on the way and they weren’t about to have their home ready in time.”

Paula finally offered Bob her full attention. Her shoulders hunched, exhausted from battling the pots and pans, when she lectured, “And what happens next time? What will they do if they have to face the world without you?”

Staring at his wife, Bob gripped his empty mason jar, his fingers whitening from the pressure, and returned, “You’ve been watching them through the window just like I have, Paula. We both know there wouldn’t be a next time if I didn’t do something this time.”

Taking his jar, Paula rinsed it off before setting it on the drying rack with the other dishware.

Her silence spoke volumes, and so Bob stood, yanked on the pants that no belt could keep affixed around his narrow waist, and mumbled, “Come see for your own self, then.”

Paula trailed her lanky husband as he led her through their humble home. They arrived in the living room. Bob pointed through their picture window.

Folding his arms, Bob griped, “Before I gave them a hand, that place was a disaster.”

“I take it you waited for them to leave.”

Bob answered, “I couldn’t very well work on it while they were home, could I?”

Leaning in closer to the window, Paula ignored her husband’s sarcasm and questioned, “So what did you do?”

Agitated that his handiwork did not speak for itself, Bob gruffly informed, “They had so many holes going on, you could have driven a truck through it. Their sticks were too small, and neither one of them can weave worth a nickel. They left everything loose as a goose, and to top it all off, they had a plastic bag just stuck in there, unsecured.”

Paula rolled her eyes and groaned, “So now I know what they did wrong, but I still haven’t heard what you did right.”

“I’m getting to it,” Bob spat. “I took some good, thick grass and patched up their holes. Then I rounded out the innards so that something could actually sit in there. Finally, I reinforced its base with some twine, fastening it every which way to the surrounding branches. Thanks to me, a tornado couldn’t budge that thing.”

Deciding to swallow several barbed comments, Paula instead tugged on her left pearl earring, an heirloom bequeathed by her long-departed grandmother, and asked, “And you think they’ll still use it, even after you fiddled with it?”

A smile emerged upon Bob’s face, so diminutive it could have been just another crack or crevice. He said, “That’s why I wore the dishwashing gloves.”

Feeling her hands already chapping, Paula thought of the soiled gloves that contaminated her counter, next to the drying, clean dishes, and grumbled, “I suppose that means I’ll be visiting the store soon …”

Then, as an afterthought, she noted, “You need a shower.”

A few days later, Bob and Paula rolled out of bed just after daybreak. As was usually the case, before Bob made his coffee or Paula read her email, they overcame their stiff joints and stumbled into the living room in order to check up on the lovebirds.

Though the bright red male and his dowdy mate weren’t home, probably thanks to the old couple’s plodding along the hardwood floor, Bob and Paula looked through their window, examined their Japanese maple, and discerned four gray eggs covered in brown and black flecks lying within the nest.

Plainly pleased that the eggs appeared safe and sound, Bob rubbed the back of his neck, working out the rigidity, and said, “You know, cardinals can live for over ten years, and they tend to stay in the same area.”

Paula chuckled while replying, “Then let’s hope they’re as good of neighbors to us as you are to them.”

She turned around, wrapped her housecoat more tightly about her torso, and began the journey through the house to the computer room. Before Paula left the living room, however, she abruptly spun and returned to her husband. Pecking him on the stubbly cheek, she whispered into his ear, “You’re a fine man.”

Bob nodded in return, feeling a surge of warmth throughout his body.

Originally appeared in the August, 2009, issue of News and Views for the Young at Heart.

This is a work of fiction. Names, characters, places, and incidents either are products of the author’s imagination or used fictitiously. Any resemblance to actual events or locales or persons, living or dead, is entirely coincidental to the story.