Against my better judgement, I’m playing the old comic book fan card.  You know the one: the “I’m quitting this comic because of a creative change!”

Some of the (sort of) rebooted titles have languished due to the change, but others have flourished, such as Wonder Woman.

You should know before The New 52, I never bought a Wonder Woman comic book in my life.  Truthfully, I wasn’t very excited about buying it for the first time ever as a thirty-something, but the fact is that Brian Azzarello is a master storyteller, Cliff Chiang is a fantastic artist, and I could not resist their combined talent.

Their Wonder Woman is rooted deeply in Greek mythology, which is totally in keeping with her history.  The Greek Gods are important characters in her title, but they are nothing like you’ve seen before.  Azzarello revitalized an already wildly popular character by making her appeal to a larger audience.  Azzarello’s interviews before the title’s release describing his plans for Wonder Woman and the Gods’ incorporation proved the main reason I came aboard.

Furthermore, Chiang draws an attractive, respectable Wonder Woman.  I’m not embarrassed for my wife to see my Wonder Woman books lying around.  I’m not worried about my small daughters’ sense of body image when they look at Chiang’s Wonder Woman on the covers.  Chiang draws her beautifully.  She is large and feminine.  She is powerful and graceful.   Her costume could be manipulated into something skimpy and trashy, but Chiang makes it appropriate and even regal.

I worry that all that is going to change.

Azzarello and Chiang are leaving the title.  They said in the beginning they had a three-year story to tell, and that third year is about over.

A few days ago, DC announced the new Wonder Woman team.  I at first felt pretty good about it.  The writer is Meredith Finch, who is, of course, a woman.  A woman writing Wonder Woman is always a good thing in my book.  Meredith’s husband, David, will be the artist.  Uh-oh.  David Finch is an engaging artist, but his women tend to appear more like pin-up models.  My red flag is going up.

To make matters worse, Meredith Finch is on record as saying she wants to veer away from the Greek mythology and focus more on Wonder Woman’s interactions with her fellow Amazons and the Justice League.

Here is where I play my comic book fan card and scream, “I’m out!”

Here’s why: I don’t want the overly sexual Wonder Woman that Finch will most likely depict in his art.  I certainly don’t want a Wonder Woman title where she is primarily interacting with the Justice  League.  You know where I can get that?  The Justice League books.  Or the Superman and Wonder Woman book.  When I read a Wonder Woman book, I want it to be a unique experience, something specific to the character that sets her apart from her shared universe.  The Finch team seems intent upon returning Wonder Woman to the status quo.

I understand their intentions, but it’s a shame.  Azzarello and Chiang made a character I previously refused to read my favorite DC title, a title I regularly told people who don’t read comic books to check out.

So I’m playing the comic book fan card: I’m out. 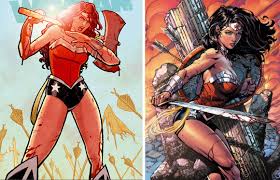 In this third installment of The New 52’s Wonder Woman, Azzarello continues to infuse Greek mythology into the Wonder Woman mythos.  Granted, her roots are in Greek lore, but I don’t believe any Wonder Woman writer has ever utilized the gods in such a dynamic fashion.  I’ve said this before, but I have never read Wonder Woman until Azzarello restarted her series, and it quickly rose to the top of my reading list.  Furthermore, in this volume, he fully introduces the New Gods with Orion.  In my mind, this makes perfect sense and is a stroke of brilliance.  What better place for the New Gods to appear than in a comic book with old gods still very much playing a role.  It is my sincerest hope that he plans a confrontation between the two groups, with Wonder Woman caught between.

I cannot wait to see what Azzarello does next.  His take on not only Wonder Woman, but Orion, Hera, Hermes, Ares, Apollo, as well as the introduction of previously unrevealed children of Zeus … it’s simply a very special story unraveling before our eyes. He and Chiang are not merely caretakers of Wonder Woman at the moment, they are architects of an entirely new mythos for her, they are not simply creating interesting stories, they are building entire worlds.

Their run on Wonder Woman will be remembered as a significant one, I assure you.

It’s with good reason that I refuse to watch the 1981 version of Clash of the Titans as an adult.  I have such fond memories of that old movie.  Whenever it came on as a kid, I was planted.  I blame it for getting me vested in Greek mythology, especially when I started realizing that our modern day comic book heroes had heavily borrowed from the ancient gods and demigods.  But make no mistake: I know that should I happen to watch the original as an adult, I would probably be sorely disappointed.  A six year old is far more forgiving than a thirty-three year old.  Oddly enough, I’m pretty sure I never caught the 1981 version from start to finish.

So when I heard they were remaking the classic cult movie, I originally scoffed at the notion and refused to watch it, especially because someone I’d never heard of had been cast as Perseus.  But then I started seeing the commercials, and my love of Greek mythology trampled my righteous snobbery.  I couldn’t wait to see Pegasus in all his glory, the Kraken as a true monstrosity, and Medusa’s evil glare as only modern day special effects could render.

And I got all of those things (though Medusa had a bit too cute of a face).  However, along the way, I realized something: I didn’t care about these characters.  Sure, the 2010 version had all of the action and technological wizardry you could hope for, but it had none of the original’s heart; it had no magic.

I blame this lack of spirit on the movie’s star, Sam Worthington.  Now, I don’t really know much about Worthington, but I know I liked him in Terminator: Salvation.  Of course, he was playing a robot in that flick, so I guess I shouldn’t have been surprised at his turn as Perseus.  Perseus is among the greatest of the demigods, up there with Theseus and Heracles; he is a future king and a hero of the people.  Worthington played him as a brooding, scowling, angry warrior devoid of any charisma, charm, or heroism.  Worthington made Perseus boring, which is nearly inconceivable.  If nothing else, at least Harry Hamlin made Perseus likable.

I was also saddened by the fact that other than Hades and Zeus, none of the other Greek gods were given their due.  Yes, they stood in an amazing Mt. Olympus, surrounding Zeus, but only a few were allowed a word or two and most weren’t even addressed at all.  This really upset me because what’s the fun of going to see a 2010 update of a story featuring Greek gods and demigods if the gods are barely even shown!

Furthermore, I strongly recommend you don’t waste your money on the 3D version of the film.  As I was watching it, I thought to myself, “Wow, they really didn’t capitalize much on the 3D technology with this.”  I came to find out later that they decided to make it 3D after the film was shot.

In addition, there are some pretty major detours from the original Clash of the Titans.  Most of them weren’t terribly distracting, and some were even for the better, but I had a difficult time with the major role given to Hades and the utter exclusion of Thetis.  It really changed the overall mood and tone of the film.  The elimination of any real “romance” also made the characters less identifiable and the story less tense.

The 2010 version of Clash of the Titans has some grand spectacles, but it lacks the heart and fun of the original version and plays like just another “warrior” flick.  And without a heroic Perseus, I don’t think any six year olds out there are in danger of being inspired.