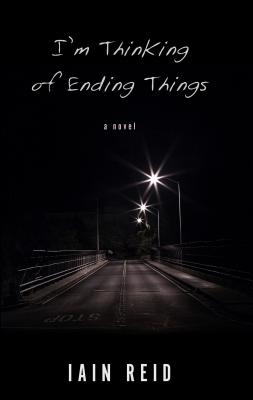 I heard Netflix planned to make this novel into a movie, so I thought I’d give it a read first. Interestingly enough, I reviewed another book by Iain Reid, Foe, exactly one year ago today.

I’m Thinking Of Ending Things is Reid’s debut novel. It’s written from the perspective of a young woman who is visiting her boyfriend’s parents for the first time. Most of the book is spent with them conversing in a car as they travel to the boyfriend’s childhood home far into the countryside. The narrator tells us that Jake is incredibly intelligent and generally a nice guy, but she’s thinking of ending things with him. They eventually reach the parents, things become very strange, and then the plot quickens to a frantic pace.

I can’t pretend that I particularly enjoyed this book. It is primarily dialogue and internal monologue, with lots of philosophizing. I found it very slow in the beginning, and while the book ends with quite a bit of suspense, the conclusion dissatisfied.

It’s difficult for me to critically discuss this book without spoiling some major revelations, so I’ll simply have to say that I never found the premise all that engaging, the big twist fell flat for me, and I generally found it far too in love with its own dialogue.

Obviously, I’m in the minority. Netflix and Charlie Kaufman found it worthy of their time, though Kaufman’s interest in the book shouldn’t be surprising considering his other work.

I’m afraid I don’t recommend you read I’m Thinking Of Ending Things, but I found Foe quite interesting if you’d like to give Reid a try.