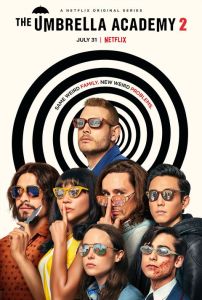 As good as The Umbrella Academy was during its first season, the second season has easily proven superior.

I’m going to go to great lengths to avoid spoilers, not just for the second season, but also for the first. My hope is that the uninitiated will give The Umbrella Academy a try after reading this piece.

The first season established the characters of these seven extraordinary brothers and sisters. Fetched from all over the world as children in order to use their wondrous powers for the forces of good, their benefactor, Sir Reginald Hargreeves … well, he created a rather dysfunctional family. Things worked out fairly well for them as children, but as they grew into adulthood and gained independence … they began to see Hargreeves for what he actually was.

Once this dynamic got covered in the first season, the second season got to blow it all apart. These interesting characters are now absolutely mesmerizing. They are flawed, funny, and lovable. Everyone has had a shift from the first season, which makes this season feel totally fresh.

The Umbrella Academy is also smartly written. The plot is mostly tight, the story is exceptionally satisfying, the dialogue is crisp, the pace is perfect, and the twits never stop. It absolutely builds off of the first season and is even dependent on the first season, but it never comes close to feeling like a repeat of the first season.

But the real magic is the actors. These actors are all charismatic and the chemistry between the brothers and sisters is a joy to watch. They are exceptional on their own; together they are magnificent. Whoever selected these actors nailed it. They seem so comfortable this season and actually living in their characters’ skin.

If you’re looking for a fun, fast, action-oriented show with superb characters and captivating plots, The Umbrella Academy is for you. Just keep in mind that it gets a tad violent from time to time, and there is a bit of profanity.