I’ve had a love affair with toys my entire life.  I’m not exactly sure what they represent to me or why I’m still drawn to them, but I’m always game to check out the toy aisles with my kids!  In fact, before my children were born, I still collected certain toys that aligned with my interest in super heroes and literary characters.

When we were planning our spring break trip to Branson, I saw that they touted the world’s largest toy museum–that was literally the name of the facility!  I’m afraid it’s no exaggeration when I declared to my wife and children that this attraction would be a must-see for us.  My kids thought it sounded cool, my wife had no interest in it at all but decided to humor me, and so we put it on the calendar.

Let me tell you–this is truly the world’s largest toy museum!  It takes up no less than three separate structures.  We first entered a building that housed a great deal of automotive and transportation toys, as well as an expansive train set managed by a local club.  The people in this building were very friendly, especially the older gentleman curating the train set.  Of course, none of us were that into these kinds of exhibits, so we made our way to the next building after a quick jaunt.

The second building we visited housed what we would consider more traditional toys, but some of these toys dated back to the 1800s!  This building had an intricate BB gun collection, as well as many toys depicting the Old West such as the Lone Ranger and Zorro.  Furthermore, this building offered incredible displays featuring the original GI Joes, Barbie, Star Wars, Star Trek, and toy soldiers going back many, many decades.  One side of the building dedicated itself to checkers through the eras, which was frankly amazing.  There was also a section made to replicate actual rooms with toys in them from the 1950s.  These were donated by Paul Harvey and his family.  We talked with several people in this particular building, some of whom were the folks who drove across the country to procure these toys.  They were extremely kind and inviting.

We finally made our way to the last building.  This place housed more modern toys and also contained a gift shop.  I found my super hero toys in this area, so I obviously had a great time.  They also had Happy Meal toy displays which were pretty cool.  Other exhibits included sports toys, Masters of the Universe, Cabbage Patch Dolls, Transformers, and much, much more.  Interestingly enough, an area within this building is devoted to Harold Bell Wright, the author of The Shepard Of the Hills, which is set in the Branson area.

If you’re into toys at all, I highly recommend paying The World’s Largest Toy Museum a visit.  Not quite sure if it’s for you?  They have an extensive gallery for your viewing at this link: https://worldslargesttoymuseum.com/gallery/ 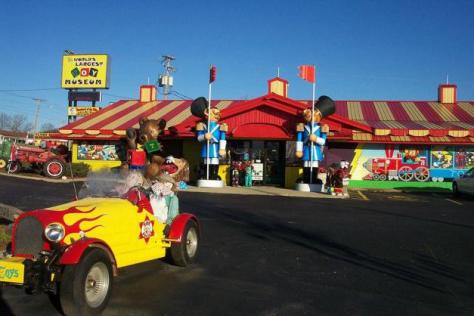