The Favourite has been slowly building acclaim for quite a while, but with it’s recent ten Oscar nominations, it shot up to my “must-view” list.

We were fortunate enough to have it play again at our local theater tonight, so my wife and I made it a date and checked it out.

I can honestly say that if you get a chance to see The Favourite … don’t.

I am clearly missing something with this film.

Look, the actresses were great–no doubt.  Olivia Coleman disappeared into Queen Anne and depicted one of the most wretched characters I’ve seen in quite some time.  Rachel Weisz and Emma Stone are also absolutely going for it with this movie.  They were brilliant.

However, the story is just … not that compelling.

If you’re unfamiliar with the tale, it’s about Queen Anne in the early 1700s.  She suffers from gout, as well as a few other infirmities.  Her mental well-being seems questionable at best.  Rachel Weisz plays her cousin, Lady Sarah.  Lady Sarah is Anne’s best friend and pretty much calls England’s shots on Anne’s behalf.  Emma Stone plays Abigail, a former noblewoman who has been stripped of her rank.  Abigail comes to Anne’s palace as a servant, but quickly works her way into Anne’s confidence.  A power struggle ensues between Lady Sarah and Abigail, with Anne loving every minute of it.

However, there’s something about this movie that I did not realize …

Both Lady Sarah and Abigail curry favor with Anne through sexual acts.  Yes, you read that right.  There’s a lot of uncomfortable moments in this film.  A lot.  It’s not overtly graphic or shocking, but I had no idea this aspect of the movie even existed.

Furthermore, most of the movie takes place in Anne’s bedroom.  The costumes are exquisite … at first.  The settings are beautiful … at first.  But this all wears thin when the movie doesn’t go anywhere else.  There is an interesting subplot about a war taking place, but Anne really couldn’t care less about it so we see nothing of it.  We get just a touch of British politics, but not a whole lot on that front either.

It’s mostly Sarah and Abigail vying for position with Anne.  They sabotage each other at every opportunity.

If I’m failing to recognize something that makes this film a masterpiece, please, feel free to educate me.

As far as I’m concerned, The Favourite is the furthest thing from a “must-see” movie. 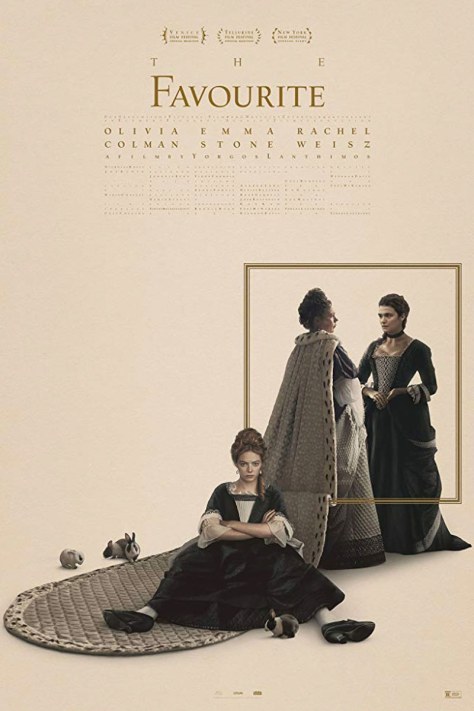