This series by Geoff Johns and Gary Frank came out of nowhere for me.  I literally heard about it maybe a month or two before its release.  If you’re unfamiliar with the concept, Doomsday Clock reportedly merges the world of Watchmen with the DC Universe proper.

Brief history lesson: Alan Moore, author of Watchmen, originally wanted to use DC’s newly acquired Charlton characters in his story.  Characters like Blue Beetle, Thunderbolt, Captain Atom, the Question, and Peacemaker.  DC wanted to integrate those characters into their mainstream universe, though, so Moore instead used them as templates for characters like Dr. Manhattan, Nite Owl, the Comedian, Rorschach, and Ozymandias.

As you know, DC published Watchmen, but the two worlds were apparently always separate … until now.  With the Rebirth movement that softly rebooted the DC Universe a few years ago, it was heavily hinted that Dr. Manhattan had a “hand” in its reformation.  Doomsday Clock will presumably address this possibility.

So, let’s talk about the actual first issue itself.  It reads very much like issue #13 of Watchmen.  Rorschach is the main character throughout the entire book.  But wait … didn’t Rorschach die in Watchmen?  Yes, and his death is definitively discussed.  I will not spoil it for you, but this is Rorschach, and if the man beneath his mask is whom I think it is, Rorschach makes perfect sense.

Geoff Johns is DC’s Golden Boy.  He has been for years.  He has captured the tone and style of Watchmen, and for better or for worse, is doing a nice imitation of Alan Moore.  Gary Frank, an amazing artist, has also captured the essence of Dave Gibbons’ art.  These are still Gary Frank drawings, make no mistake, but the panel usage, the angles, the clothes … it’s all very reminiscent of Dave Gibbons.

It takes a while to realize that Doomsday Clock #1 spends all of its time picking up after issue #12 of Watchmen.  It is a direct sequel, of sorts, and it’s a very satisfying one.  It doesn’t feel cannibalistic to me or like a cheap knock-off.  It felt very organic as a follow-up.  I just didn’t expect such a blatant follow-up.

In fact, it isn’t until the final few pages that we see a DC proper character at all — Superman.  But here’s the thing, there’s something involving his parents in those final pages that has me scratching my head.  I haven’t kept up with Superman very well over the years, but there’s a scene involving his parents that seems out of canon.  What could this mean?  Is this Dr. Manhattan’s influence?  Is this a different Superman?  Is reality bending and changing even as the book progresses?  Or, maybe, DC simply changed a part of Superman’s history for which I was unaware …

If you enjoyed Watchmen and still enjoy DC Comics, I totally recommend Doomsday Clock #1.  Geoff Johns is one of the best super hero writers in the business, and it’s fascinating to see him try his hand at a style very different from his own.  And Gary Frank … he’s just a joy.  His art has always been clean, cool, and compelling.

When you go to the comic book shop to get your copy, you’ll have lots of covers from which to choose.  Of course, I chose the ridiculously priced $5.99 cover.  It’s lenticular and features Rorschach’s face.  His inkblot mask changes from splotches at one angle to the Batman, Wonder Woman, and Superman symbols at another angle.  That’s something I never once even considered seeing during the past thirty years.  I had to have it. 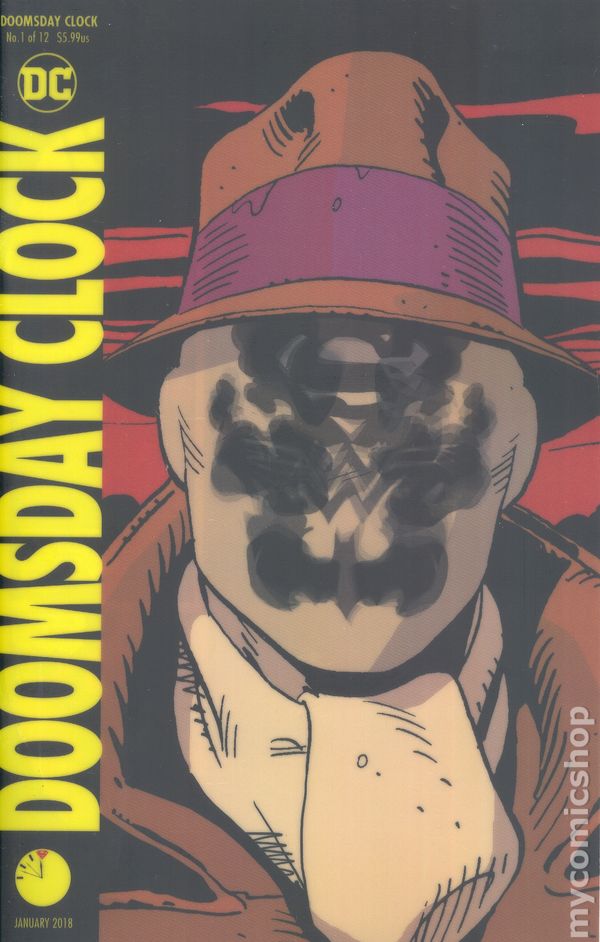