Today is Maundy Thursday, the day in which Jesus revealed one of the Twelve Disciples would betray him and issued his final command.

A few weeks ago, a woman from my church contacted me and asked if I’d like to fill in for the role of Simon the Zealot during their Maundy Thursday play.  It’s a reenactment of The Last Supper.  Though the thought terrified me, it also excited me, and so I said yes.  I’ve always regretted not getting involved in high school drama, so I figured, hey, even though I’m 40, better late than never, right?

Fortunately, everyone involved were extremely nice with fantastic attitudes.  They were a forgiving lot, assured me I’d get it down before the night of the performance, and laughed everything off.  It wasn’t a terrible rehearsal, mind you, but it did not go as well as I hoped.  I decided to practice even harder, even going so far as dropping by the church and getting in some private rehearsal.  Spending some extra time working with the stage, playing with the room’s acoustics, and getting a feel for my body language renewed my confidence.

Tonight we performed, and it went splendidly.  I had the shortest lines of anyone, and the guys amazed me not only by how well they knew their lines, but also by how committed they were to their roles, how much energy they projected, and how much they seemed to truly enjoy the moment.  We did two performances — one at 5:00 p.m. and one at 7:00 p.m.  Both were wonderful experiences.

After both performances, we stood in the lobby and greeted the audience.  People were so appreciative of us!  It really touched me how genuinely they seemed to enjoy the play and how gracious they were to us for performing it.  Talking with the audience definitely made me realize how powerful acting out this seminal moment is for people.  Several folks told me that seeing our expressions, hearing our voices, watching us interact — these things made The Last Supper feel all the more tangible.  It reminded them that it’s not just some story — it is truth.

Of course, it helped that we had a fantastic director.  We were also shepherded by an  amazing lead actor.  The costumes were phenomenal.  The backdrop actually looked like the backdrop from da Vinci’s famed painting.  The sound and lights were top-notch.  For a small, humble production, I think it made quite an impression.

Happy Easter to all! 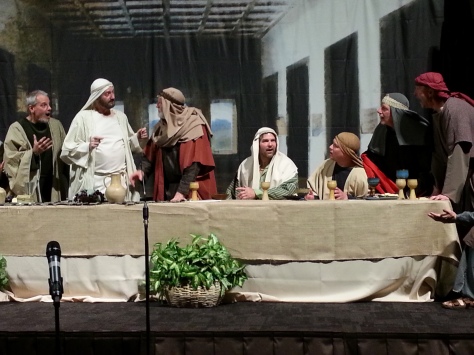