I made a promise to myself after seeing Cloud Atlas that I would go to the theater for any Wachowski film ever released.  I am, after all, a huge The Matrix fan and I even think highly of their Speed Racer iteration.  Cloud Atlas put them over the top, though.  I felt it a masterful interpretation of the novel, and they balanced character with spectacle very well.

Of course, I couldn’t keep my promise to myself when Jupiter Ascending released.  If you know me that will come as no surprise.  I finally watched it on DVD last night, and, well … I may have to rethink my stance on the Wachowskis.

No one can argue the beauty of Jupiter Ascending.  I dare any of you to find fault with its special effects, costumes, or general cinematography.  Unfortunately, there is little else to appreciate about the film.  Despite having solid actors and even a destined Oscar winner in Eddie Redmayne and a bona fide movie star in Channing Tatum, the acting faltered.  Of course, it’s difficult to entirely blame the actors, for their dialogue proved atrocious.  Sadly, the general plot also failed to make any sort of sense at all.

I love the idea of having Mila Kunis star as the title character.  I love the whole idea of building a franchise around a woman.  Unfortunately, Jupiter Jones spent most of her movie either asking questions to help clarify plot points for the audience or being rescued by Caine Wise.  Kunis’ character, though powerful according to the plot, never evolved beyond the typical damsel in distress.  Tatum played Caine Wise, a hybrid human/wolf/bird/thing.  I don’t know—I never quite caught on to that whole deal.  I don’t ask much from Channing.  He’s a great action star and can be a very good actor if dealing with the right material (Foxcatcher).  I just couldn’t care about Caine—maybe it was the English accent that would come and go throughout the movie.  Even poor Eddie Redmaye couldn’t find his mojo with this one.  For some reason, Eddie didn’t speak above a raspy whisper during the movie.  This became very distracting as well.

I credit the Wachowskis for going big.  This is a big movie.  And they didn’t shy away from making things look very, very good.  At one point Caine is jet boot roller-skating through the Chicago skyline, and it looks seamlessly real.  No more Agent Smith hurly burly fight fiascos.  Furthermore, the space ships were breathtakingly original and the dog fights were exhilarating.

But then the movie became too big.  We weren’t given the opportunity to bond with any of the characters because so, so much happened all the time, most of it nonsensical.  They attempted a love story, but honestly, Mila and Channing had no chemistry and I cringed at those scenes.  Before too long, the Wachowskis clearly lost track of their own story and that, along with stiff, unnatural dialogue, killed the film.

It pains me to say this, but you should pass on Jupiter Ascending.  I’m not giving up on the Wachowskis, though.  They’ve had far more hits with me than misses, and I’m sure they’re next endeavor will strike a chord.

They say you can’t judge a book by its cover, yet I chose this book solely because of just that.  I saw the cover art on First Second’s (@01FirstSecond) Twitter page and then immediately picked it up at my local library.

I didn’t know what to expect from The Alex Crow even after reading its synopsis.  It’s comprised of three seemingly unrelated stories that, as you probably guessed, ultimately merge.

The first story focuses upon Ariel, a Middle Eastern refugee trying to make sense of his tortured past and his perplexing present after a family in West Virginia adopted him.  They also have a son Ariel’s age and a reincarnated crow named Alex.  Alex is not reincarnated in the strictest sense.  Ariel’s new father works to reintroduce formerly extinct species through his scientific endeavors.  Ariel and his new brother, Max, are soon sent to camp where they are meant to bond.  Unfortunately, the camp is intended for boys addicted to gaming, and when surrounded by teenagers going through cold turkey, both Ariel and Max feel as though they’ve been dropped into an asylum.

The second string focuses upon a mad bomber named Leonard Fountain.  Leonard believes he’s trailed by an invisible drone, hears voices, and has skin that is literally falling off his body.  He drives his U-Haul around the countryside, listening to the voices help him find the perfect place to detonate.  As fate would have it, he’s connected to the Alex Division of the Merrie-Seymour Research Group, the very company where Ariel’s adopted father works.

The last plotline features a doctor in the late 1800s aboard the Alex Crow, which is a sea faring vessel attempting to reach the absolute north.  When the ship becomes trapped in ice for months on end, the doctor and his shipmates must fight for their very survival.  They eventually find something encased in the ice, something long since dead, something hellish, and the doctor knows then and there that he must somehow reincarnate it, even if it takes a century.

The Alex Crow’s genre is undefinable, which is the highest compliment I can offer any work.  Though it features young adults, this old man very much enjoyed it.  At times the book is brutally realistic, especially when revealing Ariel’s past, but it also holds nothing back in the realm of science fiction.  It is at times adventuresome, creepy, absurd, touching, unsettling, and thought provoking.  Amidst its multifaceted threads, however, it is consistently humorous.  The humor is sometimes good-natured, sometimes discomforting, and sometimes inappropriate, but it is always there.

Though I’ve discussed the major beats of The Alex Crow, this book is complex beyond description.  One must read this book truly to experience Smith’s originality, intricacy, and hilarity.  I highly recommend you do so. 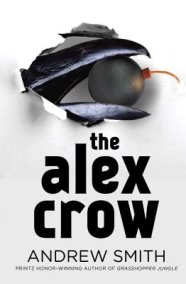 I love it when people send me pictures of themselves reading my books.  This photograph of The Imagination’s Provocation: Volume II is sent in by Jacob Padin while vacationing in Canada.  Thanks, Jacob, and I hope you enjoyed the short story collection!

Thanks very much to Natalie Fee for the thoughtful review concerning my science fiction novel, Andropia.  I very much appreciate her time.  Please do take a moment to read it …

I’m a teacher, and The Time Traveler’s Wife experienced something of a resurgence in my classroom this year.  Many seniors discovered it for the first time and, like me, now claim it among their favorite books.  Their enthusiasm renewed my interest in Niffenegger, and so I sought any work I could find at my local library.

Written and illustrated by the talented Niffenegger, she claims this seventy-seven page book is a modern day fairy tale written in conjunction with a ballet.

It is the story of a postman who falls in love with a raven after bringing it home and caring for it.  They have a child, a human girl with the heart and soul of a raven.  She wants to be true to herself, and when an ingenious doctor comes into her life, her greatest wish may just be possible.

Like all fairy tales, and literature, Raven Girl is open to interpretation.  This story could be analyzed as a work encouraging tolerance, self-discovery, and even medical advancements.  There is a villain, of sorts, but like all good villains his intentions are seemingly honorable.  It’s even conceivable that he’s no villain at all, merely misguided.

Niffenegger’s artwork is unique and particular to to her style.  Her illustrations fit the tone.  They are both unsettling and warm.

I absolutely recommend Raven Girl.  It can be read in a single sitting, and it’s thought-provoking plot line is full of potential analysis.

My wife and I watched The Theory of Everything film a few weeks ago, and it inspired me to read something – anything – by Stephen Hawking.  It did so because the film helped me realize that we have a living legend among us, one of history’s greatest thinkers still living in our day and age, and I hadn’t studied his work whatsoever.

Of course, I have virtually no background in physics of any sort, and so I read a few reviews and admittedly chose A Briefer History of Time because it claimed to be simpler and (obviously) briefer than most of Hawking’s other writings.

I won’t claim to understand everything in the book, but it really did educate me on matters formerly unknown.  Hawking is excellent at taking very complex ideas and simplifying them down to their barest essentials.

Based upon this book, Hawking is an excellent teacher and superb writer.  As a lifelong science fiction fan, I had heard many of the theories and principals discussed, but previously utilized no actual scientific comprehension concerning them.  I now at least have a very basic understanding thanks to his writing.

Because Hawking writes so clearly and simply, I am excited to read more by the genius.  If you’ve ever wanted to read his work but didn’t due to intimidation, I urge you to give this one a shot.  It is short, well-written, and educational.