I would like to say from the outset that I am thrilled Godzilla is back on the scene.  I miss the old movie monster days, and, from what I hear, Godzilla has paved the way for a new crop of films featuring our favorite monsters to arrive.

Godzilla started wonderfully.  It created a very interesting premise, one I found original.  Bryan Cranston leant the start of the film quite a bit of depth and emotional resonance.  The cinematography really astounded me with epic shots, lush locations, and intricate sets.

Of course, I think it’s only fair that I mention I didn’t completely follow the storyline at first.  That’s okay, though, they were setting up Godzilla’s big debut, so I could handle a little muddy water.

Pretty soon we got our movie monster, but it’s not Godzilla.  Instead, a giant parasite (that looks a lot like the creatures from the director’s other cool monster film – Monsters) wreaks havoc after its awakened.  It’s searching for its mate, and its calls get Godzilla’s attention.  As Ken Wantanabe’s character says, Godzilla is the alpha predator and it, along with nature, won’t allow any other giant monsters to exist.  Ooookay.  I’ll roll with that. Frankly, I just want to see Godzilla.

Now, I understand the need to create suspense.  They do a really good job at it, too. Once Cranston’s character took on less screen time, though, I very much became less engaged.  Cranston’s character’s son is a military man and trying to get back to his wife and small son as the creatures invade San Francisco, his home town, but I didn’t care too much if he made it or not.  I didn’t dislike Taylor-Johnson or Olson as the young husband and wife, but they didn’t elicit the sort of commitment Cranston garnered.

Okay, so finally Godzilla appears, and he looks amazing.  He’s got his old school look, but they also touched him up a bit and made him pretty horrifying.  We get a great scene in the daylight where he almost destroys a bridge with school buses upon it, and then night comes.

Godzilla, at the end of the movie, fights the other two monsters, and it’s almost entirely dark.  Now, I didn’t mind I waited a long time for this moment, I didn’t mind they held Godzilla in the wings in order to drive us into a frenzy, but when Godzilla’s battle unveiled, they masked in in almost total darkness.  I honestly couldn’t make heads or tails of what I saw, and that really disappointed me.  (That pun also disappointed me.)

Because of that disappointment, I really can’t say I recommend the film.  There were some very cool scenes, some amazing sets, and the special effects were top-notch, but at the end of the day, if you’re going to tease the star for the entire film, you’d better let us get a good, prolonged look at him as he displays his glory. Written by the renowned Neil Gaiman, this small picture book is unlike anything I’ve ever read.  Perhaps picture book is too simple a phrase, for that conjures up something meant for a child, which this book clearly is not.  At seventy-three pages, I read this tale in less than an hour. Every page is comprised of paintings, drawings, and even photography that weave in and out of each other and provide endless opportunities for inspection.

The story itself is something of a mystery, something of a fairy tale, something horrific, and something also amusing.  It satisfies on every level, and as soon as I finished it, I immediately reread the beginning to find the clues I’d previously ignored.   The signs are there.  The omens are given.  The fortunes read.

I don’t want to reveal much more about this story, for I think the less known the more fulfilling it is.  Just know that it is masterfully written, with just enough dialogue, description, and narration to ignite a spark within your imagination not easily forgotten.

And, just as Gaiman created a provocative short story, Eddie Campbell delivers artwork no less significant.  Like the story itself, the art of the book is multifaceted and unlike anything I’ve ever quite experienced.  As already stated, Campbell sometimes works photography into the illustrations, sometimes creates beautiful paintings, and sometimes scribbles simple line drawings with a touch of color.  Sometimes the prose and dialogue are placed within a traditional comic book sequence of panels, and sometimes they adhere to the traditions of a picture book with the prose within the illustration or juxtaposed to it.

I’ve read much of Gaiman’s work—comic books, children’s books, and novels—and I assure you that this is one of his most gratifying efforts. 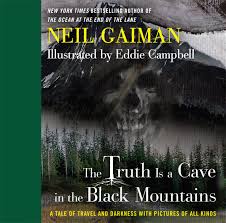 After years of serialized release, my eighteen-part Dr. Nekros saga is finally complete and available to read in one massive binge.

If you enjoy stories that span centuries, encroach upon the boundaries of reality, delve into family dynamics, provide nonstop action, and demand contemplation, then you’ll love Dr. Nekros.

You can read yours today by clicking HERE.

*At present, you will need the Kindle app for this series.  The Kindle app is free for the PC, smart phone, and tablet.

I promise to reveal nothing secretive about this book during my review, for to give away even a single detail will likely ruin the experience as a whole to the new reader.

I will simply say this: the first half of the book is utter genius.  I can’t recall of late a time I found myself so riveted, so completely engrossed, so eager to turn the page.  Flynn set everything up perfectly.  Perfectly.

As I read that first half, I actually found myself thinking, “Where will Flynn take it from here?  What direction is this thing ultimately going?”

And then, I reached the book’s halfway point, and Flynn blew my mind.  I’m talking my jaw hit the table.  The book completely changed direction and I loved it even more.

Sadly, however, the last third of the book did not delight so thoroughly.  Without being too specific, I found Flynn tossing in characters and details that, compared to the earlier installments, felt poorly conceived and even flat.  I hate to say that because this is a really well written book.  Flynn has a great style and proved herself skilled at constructed interesting, varied sentences.  It seemed almost as though she pinned herself into a corner and didn’t quite have the best exit strategy.

Honestly, the first half of the book was so good that there really was no place to go but down.  It would have been nearly impossible to deliver a satisfying ending to a story that broke out of the gates so hard.  I’m okay with the ending, don’t get me wrong, I just didn’t find it as masterfully plotted.

Would I recommend this book to a friend?  Absolutely.  I haven’t read anything quite like it—period.  I love Flynn’s characters, her style, her themes, her dialogue, and most of all, I love her plot.  I simply didn’t love the immediate events leading up to the ending, or, obviously, the ending itself.

This book is the culmination of years’ worth of storytelling.  Truly, it is the result of multiple plots nurtured since The New 52’s dawn.  Did it satisfy?  Yes.

Without spoiling too much, the events of Trinity War led to Forever Evil, which means that the Justice Leagues are incapacitated.  Save Batman and Catwoman, they are completely out of the picture.  So when the Crime Syndicate invades the planet and promptly gains control, there is no one left to challenge them.  Or is there?  Lex Luthor releases his own personal Superman, recruits Captain Cold, Deathstroke, Black Adam, Sinestro, and Black Manta, and even convinces Batman to join his efforts, and this unlikely band takes on the Crime Syndicate and their Secret Society of Super Villains.

I enjoyed this book.  I like Johns take on Lex Luthor, and I believe Luthor’s motivation to appear the hero.  Johns brought about a renaissance with the Rogues back in the early 2000’s, and his new take on Captain Cold is equally engrossing.  Always entertaining, Johns introduced some old favorites to The New 52, and even set about a new direction for several popular characters.

I will say this, though.  While I always have a great time with Johns, the book felt a little too much like Norman Osborn’s Dark Avengers.  Super hero comics are largely derivative, and everything old tends to be new again, but I found it hard to consider anything I read as breaking serous new ground.  Of course, I guess one could argue that Luthor was president before Osborn’s ascension to power.  At any rate, I’m a DC guy, have been since 1980, and it was a blast seeing new takes on old favorites—especially the Crime Syndicate with the additions of Atomica and Deathstorm.

Let’s move on to the art.  David Finch is an amazing artist, no doubt.  Unfortunately, in my opinion, his work never seems serviced by color.  In other words, his pencils are truly astounding, but, after they are colored, his art always looks a little busy to me.  However, comic books are a sequential medium, and Finch does well moving the action and story from one panel to the next.  I would love to see this book in black and white sometime.

Overall, at 240 pages, this book is well worth the money.  It resolves several plots and also sets up several more for the future.  It gives most of DC’s preeminent villains a moment to shine, and positions Lex Luthor to be more than just Superman’s antagonist.  If handled correctly, like with Norman Osborn, this multifaceted bad guy could become one of DC’s most fascinating characters.

It is with both great pride and sadness that I announce the end of my Dr. Nekros e-serial.  The eighteenth episode, entitled “Requiem for the Redeemed,” is now live and available.

In this last installment, Dr. Nekros and Zetta meet in their remote honeymoon cabin. This is an odd occurrence because Dr. Nekros is dead. Or is he?

It has been a wonderful journey.  Thank you for joining me.