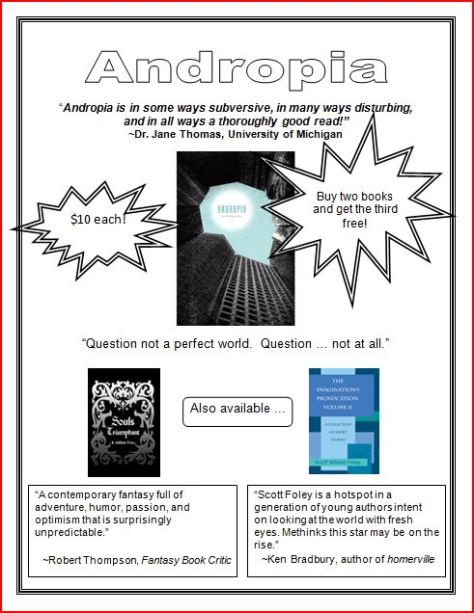 Come see me at Alpha Park Library this Saturday morning and take advantage of a special offer.  Buy any two books at $10 each and get a third free!  Get the same book, mix and match, whatever you desire.  Can’t wait to chat with you!

I’ve often said that Michael Chabon is one of America’s preeminent contemporary authors, so when I heard he had a children’s picture book available, I jumped at the chance to procure one on behalf of my three-year-old.

Michael Chabon’s The Astonishing Secret of Awesome Man is cute and innocent and consistent with what we know and love about super heroes.  The story follows the adventures of Awesome Man as he teases an astonishing secret throughout.

Personally, I found it a tad violent for my three-year-old because of the hitting and fighting.  Also, some of the language was not appropriate for her (but we’re talking “kick a little behind” and “what the heck” … nothing too serious).  I have no doubt that in another year or two I’ll be more comfortable letting her look at it.

It should be noted, however, that my daughter asked me to read it to her for three days straight after reading it to her only once … and she referred to it as “Awesome Man,” so clearly the one time I read it to her resonated.

Jake Parker’s artwork is beautiful.  The pictures are fun, colorful, charismatic, and I love the dots in places replicating the way comic books were once colored.

An instant favorite with my daughter, The Astonishing Secret of Awesome Man is a harmless, engaging picture book that, while a tad too violent for my three-year-old because of the fighting, will surely delight those a little older. 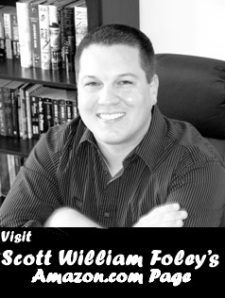 It’s my pleasure to announce my participation in Alpha Park Library’s “Meet the Authors” event on Saturday, October 29th, along with several other local writers.  Books will be on sale, pens will be ready to sign, and stories will be told, so come pay us a visit and stay for a chat!

Here are the details as shamelessly pilfered from Alpha Park librarian Heidi Rhea:

Stop by and meet your local authors.
Each author will have their books on sale and will be happy to sign
them for you or talk to you about them.

Lee Hall – Lee Hall is a native Peorian. He attended St. Bernard’s and Academy of Our Lady/Spalding Institute. In 1985, he graduated from Illinois State University with a Bachelor of Science Degree in Broadcast Communications. While still attending ISU, he began working at WEEK-TV as an intern in the sports department. In 1988, Lee was named Sports Director and began anchoring News 25 at Six and News 25 Nightside, where he can still be seen today.  Lee has written the book titled Running for Their Lives which chronicles the St. Jude annual run from Memphis to Peoria.

Jim Eller – Currently resides in Bartonville, IL. Jim continues to work daily at the family business, Eller’s Custom Cabinets founded by his father in 1989. He writes at night, and continues to dream about making writing his full time career. His has written two adult fiction books, Return of the Giving and The Chair, and is currently writing a children’s book.  http://jimellerbooks.com

Scott William Foley – Scott grew up in Beardstown, IL and currently resides in Bloomington, IL.  He returned to teaching high school English in August 2010 after a short stint of being a stay at home dad.   Foley has a few projects in the wings, including a new short story collection, a novel, and the first volume of a series featuring Dr. Nekros, a ghost hunter encumbered by his ex-wife and haunted car.  His books include: Dr. Nekros: Bloodied Pistons (Volume I, Episode III), Dr. Nekros: Phantasms and Chicanery (Volume I, Episode II), Dr. Nekros: The Tragedian (Volume I, Episode I), Andropia: A Novel, The Imagination’s Provocation: Volume I, The Imagination’s Provocation: Volume II, and Souls Triumphant: A Novel.   http://scottwilliamfoley.com

Joe Lunini – Currently resides in Pekin, IL.  Joe has been married for 47 yrs and has 7 children, 14 grandchildren, & 8 great-grandchildren. He is retired from U. of  I. Extension Nutrition and 4-H. His first book in print is the first in trilogy: The Creator and the Promise “The Journey Begins”.It is a unique blend of science fiction and religion. It is fast paced and gives the reader hope for a better world. http://www.tatepublishing.com/bookstore/book.php?w=978-1-61777-567-3

Cindy Herman – Currently resides in Bartonville, IL.  She studied acting with the first class of the Juilliard School in New York and her successful career includes working with Meryl Streep, Glenn Close, Kevin Kline, Jack Lemmon, Henry Fonda, and other fine actors. She was a regular on the PBS series “Anyone for Tennyson” and has done voice-overs, music videos, TV pilots and more than 50 national commercials. She also has studied metaphysics for 33 years. Her book, Sound, Movement, and Tears, was published in 2000.  http://www.amazon.com/Sound-Movement-Tears-Cynthia-Herman/dp/0965555801

Gary Lisman – Currently resides in Washington, IL.  Author of Bittersweet Memories: A History of the Peoria State Hospital.  Gary was born in Memphis, Tennessee but grew up in Peoria, IL.  Gary is well known for his research and his talks on the former Peoria State Hospital, located in Bartonville, IL.

Norm Kelly – Currently resides in Peoria, IL.  Norm is a local historian and author. Much of his writing comes from his real life experiences as a private detective in Peoria. He has written several books including: Early Peoria Killers, A Hallmark Murder, St. Mary’s Cathedral, Peoria Gangsters, Was Peoria Run by Gangsters?, The Shoot-Out at Larson’s Barbershop, Terror on a Downtown Streetcar, and many more!

J. D. Watts – Currently resides in Bartonville, IL.  Born in Southeast Missouri, J.D. moved to Central Illinois in the early nineties and has remained in the general vicinity ever since.  J.D. has always been a writer, always dreaming and thinking of ideas for stories or plot lines, she just never sat down and put pen to paper until about two years ago.  One thing led to another until eventually she gathered her courage to enter the first part of her original novel into the 2010 Original Fiction Contest at The Writer’s Coffee Shop.  That story went on to win the young adult category and led to her contract to release the first novel in her Children of Creation series: Convergence.

Lance Zedric — A native of Canton, Illinois, Lance Zedric has taught special education in Peoria for fifteen years, and specializes in high school students with severe conduct disorders. He is a two-time recipient of the Children’s Home Educator of the Year Award and the former Director of Public Information and Sports Information at Monmouth College. Lance has authored or co-authored eight books and hundreds of articles ranging from biography to military history to self-help.

Neal Proud Deer– Currently resides in Godfrey, IL. Neal Proud Deer has published millions of words over the course of his career as a staff writer, columnist, critic, feature writer, & book author. He has also worked as a copy editor, news editor, entertainment editor, managing editor, senior editor, and editor/publisher for several newspapers and magazines, and has served on three university faculties. He has authored the three suspense thrillers forming The Fountain Flow Trilogy. Neal has also written the Young Adult books Weird Wolves & Vamp Pyres, Five, and Mindtrapped! plus many other novels, short-story collections, and books on writing. http://www.nealprouddeer.com

At long last, experience Dr. Nekros’ cataclysmic first encounter with the demon Xaphan! In “Unforeseen Calamity,” you’ll see a happily married Micah Vadenburgh (Dr. Nekros) and Zetta Southerland, and you’ll also learn what led to Micah’s disfigurement. Though this story is set in the past, the implications it holds upon the future are profound!

Simply follow the link to buy Part IV of my Dr. Nekros serial for only $00.99!

Even if you don’t have a Kindle, you can still enjoy Dr. Nekros!  Visit the following site to learn how to download Kindle applications to your computer or smart phone:

As always, thanks for the support! 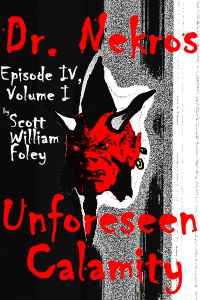